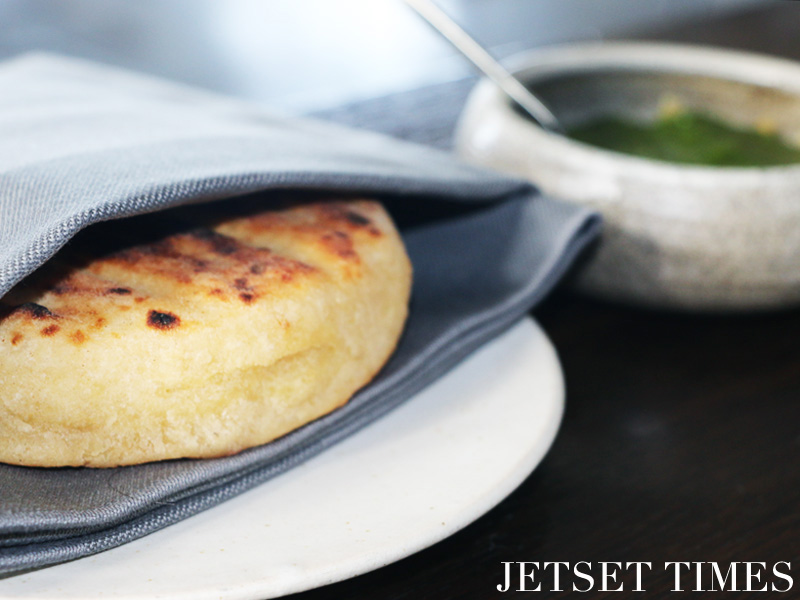 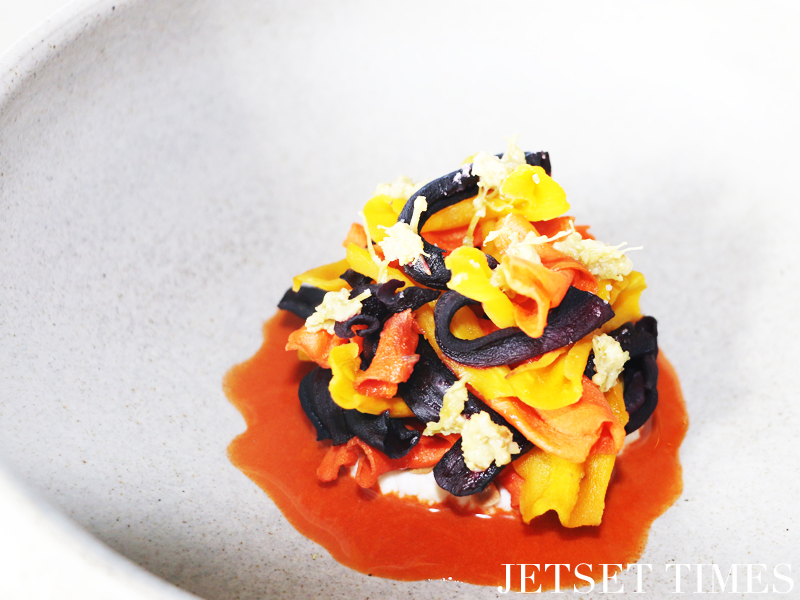 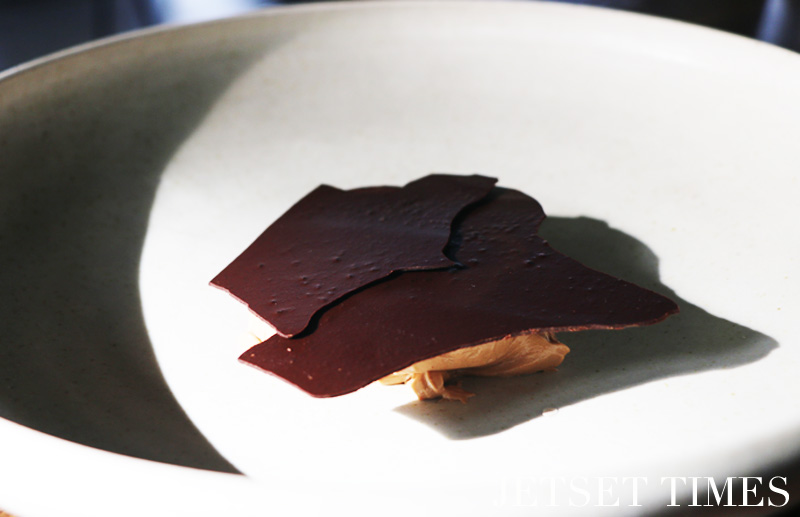 “When you eat the dish here, I don’t want all the flavors to mesh all together."

"Every bite and ingredient devoured is accessible through price."

"We have a zero waste and sustainability program here."

"There are 2 - 3 conversations Amass has with farmers on a weekly basis."

"We wanted to challenge all the perceptions of what a fine-dining experience is."

"There’s one single person whose sole job is to find products and visit farms."

From Noma to his own creation at Amass, the renowned chef shares his passion for zero waste.

Situated outside of Copenhagen’s city center, it takes 20 minutes by car to reach the renowned restaurant frequently graced by worldwide foodies. An esteemed chef, Matt Orlando, champions a marvelous dining experience which begins as soon as one exits the hotel.

Amass’ exterior appears to be an office building. Pass through its main door, the restaurant is, in fact, below the staircase. Giant graffiti mural wall, modern industrial, low-key cool, accompanied by sounds of a busy kitchen result in the perfect welcome for any hungry or curious traveler.

This is a journey. Anticipate. You’ll appreciate it.

The San Diego-native chef spoke exclusively to Jetset Times. According to Orlando:

“From the beginning, we wanted to challenge all the perceptions of what a fine-dining experience is. I wanted to set up this restaurant to have one-third of the price compared to other restaurants who are doing the food we’re doing.”

Truly, the products used at Amass are better than those executed by anyone else in Copenhagen. On staff, there’s one single person whose sole job is to find products and visit farms. In the kitchen, the only two items not from Denmark are lemons and olive oil. Every single vegetable one consumes in the restaurant is personally delivered by farmers. Amass has 2-3 conversations with them on a weekly basis. This line of communication allows Orlando’s team, and in turn his guests, to receive the best produce. Always.

Accessibility is key here. Every bite and ingredient devoured is accessible through price. The kitchen clearly operates on a high level, by maintaining the balance of refinement without coming through as elitist. At the end of the day, great food shouldn’t be exclusive. The lunch menu is just below DKK 400 (USD$63), dinner menu is DKK 695 ($120) and extended dinner menu is DKK 895 ($140) with wine pairing at DKK 425 (four glasses, $67). Portions of the daily changing menu is also donated to charitable activities.

One philosophy Orlando firmly stands by is cooking responsibly – a progressive movement which just might be gastronomy’s next evolution.

“We have a zero waste and sustainability program here. Since the day we’ve opened, we’ve reduced the amount of waste going into the landfill by 75% through cooking responsibly.”

In fact, it takes consciousness and a state of mind as a chef. After witnessing the amount of waste created by cooking, for instance, using solely the center of a vegetable, or only eating a certain part of a fish. This is where the brilliance of Amass comes into play: when a dish is in development, every single by-product produced has been laid out on the table separately. Then the team of chefs examines, for example, the stems of a piece of parsley and explores ways of using it in a dish. For stems of herbs, 2% of salt to the weight of the stems is added, then inserted into vacuum-seal bags. Afterwards, it’s placed in lactic fermentation for 1.5 weeks, then dried and grounded into seaweed that taste like horseradish.

In a sense, cooking responsibly is about thinking creatively. As Orlando explains:

“It’s the same with the pulp from the nut milk that we make into ricotta. I think about all the nut milk I’ve made in my career and hundreds of kilos of almond pulp we’ve thrown into the garbage. Today’s chefs aren’t doing it because it takes effort. Very few chefs are cooking this way, because it’s very different.”

As consumers, we should be held responsible for wastefulness. For many, eating every part of an ingredient or produce can feel like eating trash. And to these consumers, it’s important to keep in mind the numerous hours invested into a by-product. The refinement of such an operation is, in fact, more costly than any product will ever cost. Not to mention the length of thought process devoted to making food taste nothing but phenomenal.

There are chefs in the school of inventing new flavors with the mixture of different ingredients. There’s also another approach, one which Orlando follows, that assures every ingredient tastes as it’s meant to offer. Devouring the menu at Amass is a culinary trip around the world and a comprehensive adventure for taste buds from acidity, savory to sweetness. Orlando reveals:

“When you eat a dish here, I don’t want all the flavors to mesh all together. We work really hard to compose a dish so that you can taste each individual flavor at a different moment in time.”

Due to the authenticity of ingredients used in Amass’ kitchen, Orlando values every piece of produce on the table as a form of respect for the farmers who take tremendous care to grow their vegetables or live stock. For the acclaimed chef, such a respect is extended in the way his team cooks: protecting the original taste of products. A dish embellished with plum powder, for instance, takes a traveler back to Japan. As he explains:

“We salt fermented plums in the summer time, which makes their skin fall off automatically. And the plum powder is made from all the skins that fall off, dried then made into powder.” 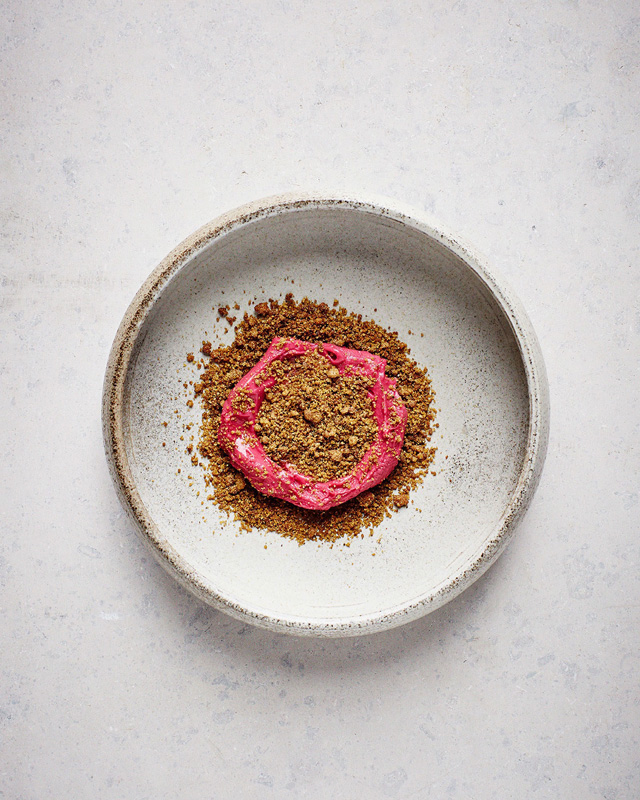 This thought process is significant because for a long time, classic French cuisine was regarded as the forefront of cooking. Then, molecular cuisine from Spain had its moment. In recent years, Scandinavian cuisine of emphasizing natural resources is heavily spotlighted. Though all things in life come and go in cycles, the idea of ingredient-focused rather than technique-focused, frankly appeals to more people. In many ways, there are more in-depth stories to be told in the natural way of cooking. In this approach, one is at liberty to dive into questions including: where did this chocolate or carrot come from? It allows farmers to deliver tales of where the beef or the vegetable was grown. That constitutes an exchange in comprehension through food.

Orlando has a tremendous resume which brought him to NYC’s Aureole and Le Bernardin, then to U.K.’s Le Manoir aux Quat’Saisons and The Fat Duck. Followed by impressive experiences at Thomas Keller’s Per Se back in NYC, and as first Chef de Cuisine at Noma. In 2013, he finally opened his dream vision at Amass.

“I love Noma, my blood is on the wall there. It was a very intense five-year experience. But it was a very conscious decision to make everything at Amass separate from Noma. Even if someone on our team comes up with something that is remotely close to what is on the menu at Noma, I’ll say ‘No.'”

In a small city like Copenhagen, many restaurants are working off of the same ingredients with chefs arriving from the same school of thought. Of course it’s inevitable that at one point, two or more chefs will come up with the same idea on the menu. As a traveler in Copenhagen, there are 4-5 restaurants that make must-eat lists. Hence, Orlando devotes extra efforts to ensure his dishes aren’t repetitive versions of those in other Copenhagen restaurants.

Last year, the chef made a conscious choice not to include wild duck on his menu when it was abundantly in season and appeared on every high-end restaurant’s table. Instead, he discovered three hunters to search for wild goose. Amass would receive five in one day or 23 on another day. The restaurant’s menu would alter according to exactly what the hunters could deliver. If Orlando’s staff had been working on a dish for two weeks that included pickled pork fat, squid and charred broccoli, but only to realize that Noma’s menu showed raw broccoli stems, raw squid with pine oil, Orlando would nix two weeks of work, to deter from similarity.

Unlike French or Italian cooking, Scandinavian cuisine contains zero tradition. Since Denmark’s Protestant background regards food as a source of substance rather than something to enjoy, Scandinavian chefs were looking at Spain or Italy for culinary inspiration. Until the arrival of Noma.

“The first few years at Noma was a real fight. People used to call us ‘seal fuckers,’ because we were cooking with whale fat and seal blubber. People couldn’t understand how cooking with Nordic ingredients was possible when there wasn’t much to work with. Even if we found ingredients, it was so hard to get them from point A to B.”

There’s a sense of community amongst the chefs in Copenhagen that’s unparalleled to other parts of the world. Without egos, no stealing cooks, everyone are friends. There’s an understanding in Copenhagen that if chefs don’t stick together, the culinary scene which has attracted hundreds of thousands of tourists, may implode on itself.

“Our carbon footprint is drastically smaller than any average restaurant, because we have such a strong zero-waste program. But I’m a spokesperson for a San Francisco-based company, Zero Carbon Footprint, which performs audits on restaurants. Their reports shows how we can reduce carbon on a daily basis. It’s an eye-opening experience, and I’m trying to get as many restaurants on board as possible.”

Amass has become a catalyst for restaurants of the future. In a time when restaurants are cooking irresponsibly – only using tomatoes from Spain or avocados from Mexico – Orlando hopes that global cuisine becomes more compartmentalized. So that when one travels to Denmark, one is truly tasting the terroir of the land and what is locally grown. Imagine if we traveled to Paris or China, we’re truly tasting Paris or China. Such a simple concept, yet rarely done. At the end of the day, it will be up to the next generation of chefs to advance the movement of cooking responsibly.

To have a restaurant, one must amass many things: emotions, products, ideas, people. Orlando has successfully blended these elements into one appetizing authenticity. A zero waste at a time.

8 Danish Fashion Designer Boutiques You Can Shop At