Dr. King’s legacy lives on even in the face of injustice and divisiveness.

Martin Luther King Jr. National Park is a free attraction in Atlanta, Georgia where you can learn about the Civil Rights Movement of the 1950s and 1960s. Not only are their memorials for MLK Jr. and Coretta Scott King, but you can also visit MLK Jr.’s childhood home and a fire station down the block from his home that he grew up visiting.

When walking through the grounds of that national park, the tombs where MLK Jr. and Coretta Scott King are buried, which are atop a reflecting pool. Right in front of this, there is a panel of walls where Dr. King’s Six Principals of Nonviolence are engraved. Audio of some of Dr. King’s most famous speeches is played via loudspeaker in this specific area, so not only do you see his ideology, but you can hear it in his voice, in his own words. It was a poignant moment and for me, the highlight of the visit.

In the museum gallery there is a section dedicated to Ghandi, as he and Dr. King shared the same ideologies of nonviolence. There is also a timeline exhibiting other influential figures in the Civil Rights Movement, some of whom are still alive today. I liked these inclusions as it shows the ideologies that inspired Dr. King and then goes on to outline those who King himself has inspired since then. We are given a tangible example of both those who impacted Dr. King as well as who went on to impact, and we can see the effects of his efforts impacting the minds of civil rights activists to this day.

The park is very informative, we learn a lot about King’s background and legacy. But beyond that, being at the park provoked a deep sense of admiration in me as a visitor. We are taught about segregation in school, but it is always presented as the deep dark past of America that we have moved past as a country. Although so many strides have indeed been made, we really are not that far removed from this era of history, and our country is certainly still affected by this antiquated mentality. Going to this national park, however, instilled me with a sense of hope that more strides can be made in the fight for equality. Martin Luther King Jr. is such a vital figure in our history and is continuing to inspire young minds, and this park does a beautiful job of showing you that and also making you feel that.

At the very end of my visit, I walked back past the reflecting pool, which was where I had initially began my journey through the park. When I turned directly behind me, I saw the Eternal Flame, a feature of the park I had missed before. In front of the flame, there is a placard that reads:

“The Eternal Flame symbolizes the continuing effort to realize Dr. King’s ideals for the ‘Beloved Community’ which requires lasting personal commitment that cannot weaken when faced with obstacles.”

This, to me, was so powerful. Being able to see a physical representation of the everlasting pursuit of justice was a symbol that Dr. King’s legacy lives on even in the face of injustice and divisiveness.

It is powerful to visit the home that bred the mind of one of the most influential Americans in history, and then see an entire park that has since been dedicated to him. A distinct sense of reverence can be felt when visiting the MLK Jr. National Park, it is certainly a must-see when visiting Atlanta. It was certainly a great introduction to such a culturally rich city. 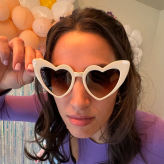 Mandy enjoys baking, 90's R&B & indulging in french pastries. Her favorite travel experiences are swimming in the hot springs of Budapest & riding a camel in India.

American Big Pharma: The Bad, The Even Worse & The Ugly.