These legs were made for walkin’, and that’s just what they’ll do.

These legs were made for walkin’, and that’s just what they’ll do. I genuinely believe that the best way to experience any city is on foot. And, since installing a step counter on my phone, I’ve been extra-committed to hitting the pavement around my amazing base Madrid. If, like me, you aim to rack up at least 10,000 steps per day while traveling (gotta counterbalance all that vacation eating and drinking somehow!) and you want to get in some good exploration while doing it, charge up your Fitbit or phone and read on for three of my favorite 10,000-ish step walks (plus a bonus!) around Madrid!

1. For the nature lover.

For a big city, Madrid has a surprising amount of green space. Parque Dehesa de la Villa is one of the most underrated parks in Madrid, but, if you’re looking for the experience of getting out of the city and actually breathing in some fresh air (impossible in the city center), it’s hard to top. Start at the northern end of the park, meander through it, stop for a bit to catch some sun, and continue on. From the southern end of the park, cut west toward the massive Parque del Oeste. If you need a little direction for your wanderings, La Rosaleda (rose garden) and the teléferico are both easily accessible along the eastern swatch of the park and are each worth a look. Finish your walk in time to see the sunset at Templo de Debod and grab a drink at a nearby terrace to reward yourself!

2. For the beer connoisseur.

For a long afternoon of walking and drinking, it’s best to start with a bit of a base. Try Pez Tortilla in their new location on Calle Cava Baja. Tasty Spanish tortillas (15 unique varieties!) plus an all-star selection of craft beers on tap and in bottle (over 70 to choose from!) make this an obvious choice. From there, head north toward Calle Segovia, even farther north toward Calle del Sacramento, past Basílica de San Miguel, and toward Mercado de San Miguel. It’s not the best market for craft beer, but this is a good opportunity to let your lunch settle and maybe grab a dessert or some olives before your next drink. Your next destination is Ópalo Gastropub just east of Plaza Mayor. North from there, in Barrio Malasaña is The Stuyck Co., my personal favorite for service and quality. If craft beer is your passion, you cannot miss the area of Barrio Chamberí known as the ‘beer triangle’. Most of the offerings are along Calle Cardinal Cisneros, so head that way and take your pick. If you’ve been drinking more than a caña at any of these places, you’re going to need a bit of a walk and possibly another meal before you can continue. Go west on Calle Alberto Alguilera and follow the signs for Conde Duque Cultural Center. All the exhibits are free and definitely worth a look. If you’re feeling peckish (or maybe just have a case of the beer muchies), drop into Crumb. They have a few bottled craft beers, but the artisan sandwiches are the real draw. I cannot recommend the roasted veggie sandwich enough—seriously next level. Once you’re fed, there’s nothing to stop you from finishing out your night of drinking craft beers at Taproom Madrid in the Argüelles area of Chamberí. Don’t forget to hydrate regularly (with water, duh) along this route. Salud!

4. For the culture vulture.

For your fix of art and culture, start in Plaza de Colón at the Fernán Gómez Centro Cultural. The center has rotating exhibits, as well as music, dance and theatre. (Check the program in advance!) One of my absolute favorite walks in Madrid is along Paseo de la Castellana—walking along the tree-lined pedestrian route in the center of multiple lanes of traffic makes me feel like I might live in the most perfect city in the world. Palacio de Cibeles is your next stop. If you’re feeling spendy and want some of the best views of the city, have a drink or nibble on their rooftop. Then, proceed east toward the Puerta de Álcala and Retiro Park. Take a spin through the park and loop back around toward the Thyssen Museum. Don’t miss their temporary Picasso/Lautrec exhibition, here until January. Next up is the massive Prado Museum. Not the best one if you’re short on time, but no visit to Madrid is complete without at least poking your head in. The final stop on your museum crawl is the Reina Sofía, best if your tastes are a little more contemporary. If your dogs are barking, take a load off at Arzábal, the museum’s beautiful patio restaurant.

BONUS: For when you’re dodging raindrops.

Summer officially ended in Madrid two days ago, and I’m currently writing this while holed up at home avoiding the rain. But, even in rainy season, there’s no excuse for staying inside and not clocking those steps. Rainy days were made for market-hopping and movies. Just don’t forget your umbrella! Mercado San Antón is a good place to start with plenty of tasty offerings, including fresh produce and juices. It’s never a bad idea to have a wander through the shops in Barrio Chueca. Though the prices may be steep, you’ll come away with lots of interiors and fashion inspo. While you’re in the neighborhood, be sure to pop into Bunny’s Deli and grab an outstanding vegan dessert to enjoy later. Next, cut over toward Plaza España (beautiful in the rain) and catch a movie at Cine Renoir España, one of the few cinemas in the city that shows movies in their original version and not ridiculously dubbed. Backtrack toward Mercado San Ildefonso to grab a bite for dinner. And, finally, cap off your day with a drink at Mercado Platea. 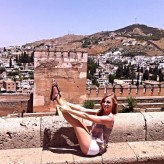 As founder of Fresh to Death Fitness Madrid, Sarah loves to kick back and relax on one of Spain's breathtaking beaches with a craft beer for the ultimate laid-back vacation.

4 Of The Best Modern Spanish Restaurants In Madrid