Behind all the tourist traps of celebrity house bus tours, and wax museums there’s an incredible amount of culture that LA has to show.

When traveling to LA most people tend to go for the beaches, the glitz and glam found on the walk of fame, the Hollywood sign, and maybe a chance to become famous themselves. But behind all the tourist traps of celebrity house bus tours, and wax museums there’s an incredible amount of culture that LA has to show.

A hidden gem lies just up the Pacific Coast Highway nestled into the hillside of Pacific Palisades; The Getty Villa. A call ahead for tickets is required, but this quick uber trip is worth the ride. The villa, which opened as a museum to the public in 1974, was originally constructed for J. Paul Getty’s private collection as it had grown too large to be housed solely in his home. While the Getty Museum is much more expansive, The Getty Villa was designed by incredible architects such as Robert E. Langdon Jr. and Ernest C. Wilson Jr and houses some of Getty’s most prized pieces. The villa houses 44,00 Greek, Rome, and Etruscan antiques dating from 6,500 BC to 400 AD. After a visit to The Getty Villa and a walk through the gardens one can continue up the Pacific Coast Highway to Malibu and hit the beach. The Getty Villa is a worthwhile stop and only costs $15 for entrance, allowing a peaceful and serene day spent looking at antiques, viewing the ocean from the balconies, or spending lunch in the one of the tranquil gardens.

Art not as old as 6,500 BC has also begun to spring up in downtown LA. If you’ve ever found yourself at the Dodger Stadium, Chinatown, or Lincoln Heights only a few blocks away at 1726 N. Spring Street, just next to the railroad tracks, lies a warehouse complex. Or at least on the outside. I first found myself at 1726 N. Spring St. in January 2018, riding in an Uber into a seemingly quiet and almost shut down part of LA. The life and color of downtown quickly faded and turned into warehouses and boarded up building, making me question whether I was going to an art opening or if my Uber driver was simply taking me for a ride. Once the Uber driver pulled up and said “here we are” I triple checked the address to ensure that I was in the right spot and spied a mural that read Into Action, the name of the show, and hoped out into the dark streets. Once I turned the corner it was if I had entered a whole new world. Vibrant music echoed from one warehouse type building into the open air, while the one to the left people lined up to try to enter this box of a building. I had only ended up here as my mom, Sarah Hoskins, was a photographer in the show. I really questioned this “pop-up” art phenom, if they’d really just put artwork up on the walls of a warehouse for 10 days assuming people would show up.

I was dead wrong and my perception of “pop-up” art shows changed that day. Into Action was hosted by a group called Taskforce and Artvist who had a mission behind producing this show. As they explain, “Artists help us make sense of the world around us. They help us challenge injustice, question what we accept as normal, manifest new futures and inspire us into action. When artists and activists come together, when creativity and organizing combine, lasting answers emerge.”

Except artists weren’t the only ones who were called to be a part of Into Action, presentations and events were hosted by celebrities such as The Black Eyed Peas, Van Jones, Vic Mensa, Tony Award Winner Sarah Jones, and many more. All coming together as one to fight against race issues, gender issues, for social justice, just to name a few. This seemingly box of a warehouse you leave thinking about so many things, but also feeling empowered to stand up and fight back knowing that even while these works of art and famous people lie miles off the walk of fame in Hollywood that impacts can still be made by anyone who comes through the show and feels inspired.

You may be wondering why I’m talking about traveling to a pop-up art show in LA when it occurred in January and is long over by now, but that’s where you’re wrong. These are recurring pop-up shows. Now, until June 10th another show is occurring titled WE RISE and all free of charge. As Taskforce explains, “At WE RISE we will work together to manifest new systems of care that support the empowerment of health and wellbeing as a civil right.” Freedom of identity, critical justice, online bullying culture, mental health and are some of the topics that will also be portrayed through art and events at this show.

Next time you’re in LA check out the Taskforce and see if there’s a chance a pop-up show is going on, go hangout in a warehouse, and who knows maybe you’ll catch a speech by a famous music artist or athlete all in the spirit in activism. 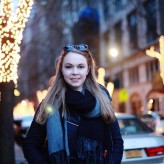 Why The Super Bloom Has All Of SoCal Going Insane

How To Spend A Weekend In Laguna Beach

Why Female KPOP Groups Might Be The Next Big Thing