So much more than “Marijuana! Prostitutes! Canals!”

Sitting in the bar in Amsterdam, my two travel companions and I were becoming a little reminiscent of our travels thus far. Not wanting to leave and definitely not wanting to sit on a train for six hours, we all agreed on how much we had loved our stay in Amsterdam. It had become a habit to take a walking tour upon entry into a new city, and one of my friends commented on how much she loved our tour guide here. We all nodded in agreement.

One of the themes that seem to emerge from my experiences abroad is the way in which my travels have changed my original perception of a thing or a place. Given that Amsterdam is a destination full of clichés, our tour guide, Dave, was especially helpful in aiding this process. Before the tour even started, Dave asked everyone, “What do you think of when you think of Amsterdam?” A clamor of voices shouted out the obvious: “Marijuana! Prostitutes! Canals!” With a subtle smile, he simply nodded his head and then promptly started the tour.

My days in Amsterdam were filled with the 2012 World Press Photography Exhibit, the ever-illustrious Van Gogh Museum, Dutch pancake lunches, and bike rides through the city. I will be the first to admit that the notorious elements of Amsterdam were all I knew of the city before my visit. Those elements, however, were greatly outshined by more cultured attractions and the omnipresent charm of Holland’s canalled city.

Throughout the course of the tour, Dave took us through Chinatown, the redesigned student district, and the Begijnhof, a Beguines community. He pointed out the strong bike culture in the city and explained the historical roots of prostitution and its connection to the church. I saw the narrowest house in the world, various buildings used in the slave trade, and a squatter’s house covered in graffiti. I learned about how the facades of the buildings are built at a forward slant so that an external pulley can hoist furniture in and out of apartments. We walked over bridges, alongside beautiful canals, and past the flower market. Dave ended the tour by telling us a story about Amsterdam during World War II and how the Dutch people had openly protested the discrimination of Jews. Amsterdam has historically been a place of great tolerance; tolerance whether it be for soft drugs, choice of occupation, or religious views. Dave concluded, “Thank you for taking my tour and I hope that when you now think of Amsterdam, more comes to mind.” 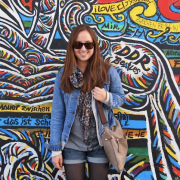 Jocelyn was a contributor for Jetset Times for a year, and has continued to travel around the world. Her stories are often about food, as she's an avid foodie (and knows SO MUCH about it!)

What Do The Dutch & Expats Think Of The US Election?

Inside The Netherlands’ Progressive Drug Scene

Amsterdam Neighborhoods: A Breakdown MADE For Travelers