All ears on us

The master at work

Hidden in the treetops, it’s truly an amazing place to make music.

Here at Jetset Times, we’ve been fans of Australian band Halcyon Drive for years. So, if you’ve yet to listen to their imaginative, indie-inspired jams, it’s time you start. Since there’s no better way to get to know people than to travel with them, Halcyon Drive is giving you an exclusive, inside look into their Australian tour experience! They’ve shared their personal tour diary with us, complete with photos that will make you want to book the next flight to the land down under. We’ll be featuring their diary entries from different Australian cities every week, starting today with Travel Diary Part 1. Now turn up their latest single “The Birds” to set the mood, and let’s head out on tour with Halcyon Drive!

Today we kicked off our first run of shows in over a year with a sneaky little trip up to Sydney. Despite flight delays we just made it in time to our venue for the night, Marly Bar Newtown. Local legends Pirra were kind enough to jump on the bill and provided the perfect start to the night. They even bought along a beautiful old 60’s Ludwig kit to  share with us- something that Max was very excited about! It was great to finally be on stage again after being head down in the studio for months- and we seriously cannot wait for the rest of the shows! We had a few drinks after the show with friends, family and fans that we hadn’t seen for a while and then got an early night to prepare for a big day of promotional activities to come.

Social media content generation day! Today was all about promoting our tour and new single The Birds. It was a glorious Sydney day, and we spent it parading around town getting footage of us doing a bunch of fun things – which was great because we got to do fun things. We squeezed in the obligatory Catan game in a ripper beer garden and then played Frisbee in Camperdown Park- something that is always on our list of things to do when we’re in this part of town. Later we went to 1989, which is an old school video game arcade on King Street, Newtown. Finished a great day with some (more) beers in Marrickville – before heading back to the airport and being delayed, again. Ah the joys of touring.

One of the best things about being in a band is following in the footsteps of your musical heroes, and the ultimate is when your foot manages to land smack bang in the middle of their prints. We spent the whole weekend shacked up at The Grove Studios on the central coast of NSW, the place where some of my favourite Aussie albums (Silverchair’s Diaorama, Something For Kate’s Echolalia etc) were made. While technically not a tour weekend, getting away with the whole of our team to put the finishing touches on our debut record and listen back to it in full, in this incredible location, was one of the biggest events of the year for us. Hidden in the treetops The Grove is a truly amazing place to make music- I hope one day not too far away we get to head back and make some more music here.

Check back next week to read their Travel Diary. 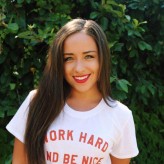 Jordyn is a college student from California. She is an aspiring writer who fell in love with Italy while living there for a few months. She loves shopping and trying local foods in a new city.