At Jetset Times, we believe in giving back.

At Jetset Times, we believe in giving back. Today’s jetsetter is someone who is aware of social issues around the world, and carry the will to lend a helping hand.

For every purchase that you make on Jetset Times SHOP, we will donate 5% to an organization that we know are doing incredible things to help others.

Have you seen our #FuelTheFuture campaign?

During winter of 2013, Jetset Times journeyed into the island archipelago of Bocas del Toro to visit schools built by Give and Surf, a non-profit organization created by New Jersey native Neil Christiansen. Give and Surf promotes early education for children in local indigenous communities by building schools, and hosting after-school and language programs. They seek to fill the gap in resources that exists for communities that are peripheral to the government sanctioned schools on the main island. There is nothing like seeing a student succeed. 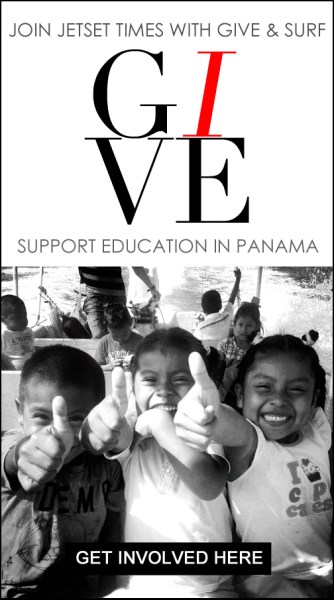 SEE ALSO: Jetsetter With A Cause: Neil Christiansen of Give & Surf

Jetset Times has partnered with Give and Surf in order to continuously act on our belief that traveling is the best form of education, and that education is a right, not a privilege. Our “Fuel The Future”  fundraiser aims to raise funds specifically for fueling the boat that takes the children and volunteers to school each day. Fuel is not only vital every day for the organization; it is also their greatest expense. We hope that in sharing our support for Give and Surf, our readers will join us in fueling the boats and facilitating safe transport for the children to and from school.

We’ve collaborated with Give and Surf on a Fuel the Future candle – definitely one that you won’t stop burning! For every candle, proceeds fund the school boat that costs $30/day to operate. Yes, that’s how the children get to school everyday!

You can also make a tax-deductible donation through our Fuel The Future that raises funds to keep these boats running.

Here are just a few other organizations that your JST SHOP purchase will go to:

Our good friend Ninette Murk started a non-profit organization ‘Beauty Without Irony’ has launched the international project ‘Designers Against AIDS’ (DAA) in 2004 in order to raise AIDS awareness in the international media and towards the general public, more specifically towards young people in the industrialised countries using elements from pop culture (music, fashion, design, arts, sports, film, celebrities, etc).

Another good friend of Jetset Times CEO Wendy Hung is Nicole who opened up her home in 1986 to provide HIV/AIDS patients with a secure place to live in. Out of compassion, she established Harmony Home in Taiwan with the hope of fully reintegrating them to the society.

New York City’s Exploring Paths organization was started by Wendy’s friend, Katherine Elizabeth Long who started a mentorship program that helps youths in urban environments by providing them outlet to have fun living healthy, active lives while simultaneously exploring their own paths of development through biking, mentorship and nature.

Go to our shop and help out these amazing organizations!

What Is Monkeypox, And Should I Be Worried?

A Young Leader’s Guide To The World Justice Forum

Understanding What The Overturning Of Roe v. Wade Actually Means

Remarkable Locations To Visit While Birding In Panama