I don’t call myself the most storied traveler, but I have seen some wildly different countries across the world. That being said, none has ever been more beautiful than Ha Long Bay of Vietnam. I realize that this is a heavy statement, but I make it with utmost confidence. This place amazed me on so many levels.

My husband always dreamt of SE Asia and thus the trip was planned. As a history buff, he insisted that we stop at the Cambodian Killing Fields of Phnom Penh, which were harrowing but important. However, to counter his grim demand, I said we had to go somewhere pretty.

Surprisingly easy! We flew into Hai Phong, which is the port town right outside the bay. Most travelers fly into Hanoi, a bustling metropolitan with great shopping and better street food. From Hanoi, one can take a bus, but there is the inevitable ferry ride to the bay. The Vietnamese are very friendly people and know what you are there for. A taxi brought me directly to the ferry where I found myself on a commuter ride to Cat Ba Island. Total cost? $5. I think I overpaid.

Upon arrival, we rented a motorbike for $5 a day. For a full day of wonderful site seeing, I recommend the below sites.

There are about three roads on the island, so just a quick up the hill, left and sharp right, you are on a winding path climbing steadily upwards. After 5 minutes you realize you’re going to the top, as the ever-increasingly beautiful view of the harbor pokes through the trees. There is a makeshift hut as a parking lot and with one sign guiding into the trees. You have arrived at Cannon Fort.

The site was a Viet Cong stronghold, which first held off the French and then (you guessed it) the Americans. The stone bunker still remains, with rusted 1970s cannons built to sink invading ships. Tunnels guide you to old offices, and atop there are a few helipads. Today, there is a museum of memorabilia and a cafe for tourists. The view at the top is breathtaking.

Back down the winding road, and there are so many more sites to see. The second stop was the bluntly titled Hospital Cave.

Take the one road farther north and you encounter a small cafe within a small village with a small sign saying “Hosptial Cave.” For a low fee, you can enter the cave, which had a fully functioning hospital and hideout for the residents of the island during the American War (that’s right, it’s the American war). A winding staircase will bring you to the entrance, and a tour guide will walk you through for donations. This is a remarkable feat of engineering, as there is a three-story hospital built within stalactites and stalagmites. It had running water, a cafeteria, bunks and even an area to train new soldiers.

Continue up this same road and there is the National Park about 25 minutes north of Hospital Cave. The park takes up most of the island and is arguably the main attraction. Hikes range between difficulties and lengths. Enjoy the winding paths in and out of tropical foliage, and keep an eye out for the endangered Cat Ba Langur. This mammal is only found on this one island and is one of the most endangered primates in the world. Today there are about 68 left.

The northern port is only another half hour up the road but is a good landmark to hit and then head back. As you see the end of the line arriving, a picturesque wooden pathway snakes along the side of the bay. It was too irresistible and I found myself pulling over to stroll. At the end is a shrine and I admit to having no knowledge of the local religious customs. But it didn’t stop me from drinking in the magic of this place. The boards creaked under my shoes and the saltwater lapped at the sides. It was complete serenity.

Don’t forget the famous noodle soup! On our way back we stopped on the side of a road, which ended up actually being the chef’s residence. She whipped us up some homemade pho on a gas stove. Two phos, two beers for $4. It was delicious! Don’t be afraid of the sauces left on the table. They add a zesty compliment.

And in general, there are so many caves! Going down the roads, there are always seemingly abandoned sites pointing towards a deep path. We stopped at one on our way (which means we sadly had to ignore a few in order to cram in all the activities). What we found was an intricate cave that we had all to ourselves. We did some amateur rock climbing and tramping before returning to the road. Enter at your own risk!

And save the Cat Ba Langur!! 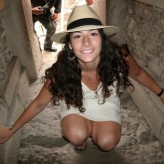 Top 3 Recommended Travel Itineraries For A Family Holiday In Vietnam

Uncover The Beauty Of Silk Sense Hoi An River Resort

Technology & Travel: How To Travel The Filter-Fee Way