As an Indian American, chai was a fundamental part of my household and continues to be one of the deepest ties with my Indian heritage.

The word chai, meaning tea, came partly from the word cha in Chinese. Chai was first invented around 5,000 years ago as an Ayurvedic beverage meant to heal and energize those who drank it. The combination of spices, including: cardamom, ginger, cinnamon…and more, were added to aid in digestion and circulation.

In 1835, however, black tea gained popularity in India through British plantations. As prices were too high for the average Indian citizen, vendors used spices, milk and sugar to make and sell tea across India. In the 1960s, black tea became more affordable and was used in combination with the spices, milk and sugar to make what is popularly known today as masala chai. Darjeeling and Assam are the most favored black tea bases but in South India, it’s also common to use green tea as a chai base.

As Chai continues to be a well-liked and an important beverage in India, its demand has also spread across the world. It’s often served in the morning, when guests come over, and also in the early evening with some savory Indian snacks. Chai has also hit the Western market, known as “chai tea” in many places. A part of me cringes every time I feel like ordering a “chai tea latte” at Starbucks because, fun fact, saying “chai tea latte” is like saying “tea tea latte!” Besides the name, the taste is much more muted than the chai my grandma makes.

Chai has followed me as I’ve grown up. As a now grown woman of immigrants, I often find myself looking back at my childhood trying to figure out if I was as appreciative in my Indian culture as I am now. Growing up, my connection with India mostly existed through symbols. For example, hearing my parents speak Gujurati, waking up to soap operas playing on the TV, seeing my Dada (grandpa) pray in the afternoon…etc. It felt like a lot of my Indian heritage existed around me but I wasn’t a part of it. Chai was the first thing that provided me a sense of cultural heritage. Naturally as I aged, I became more immersed in my culture but drinking chai every morning and evening with my family made me feel included in some secret tradition. Obviously, it wasn’t just my family doing this. And that made it even more special. Such a simple act made me feel connected to a country so far away from my New Jersey home. 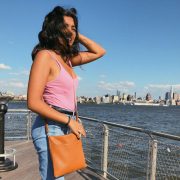 6 Austrian Designers For Your Next Trip To Vienna

How To Hike The Two-Day Inca Trail To Machu Picchu