You must find fado.

You must find fado. That was what they insisted when I mentioned my upcoming trip to Lisbon. Who is fado? I gazed out of the window of the bus wondering and watching the landscape change from the hard, dryness of Castilla y Leon in Spain to the greener, wetter foliage of southern Portugal. As we entered the city, I was taken aback by the diversity of architecture on every block. Some buildings boasted bright pinks, yellows, blues and bold designs, while others stood tall along austere and classical lines. Palm trees lined the streets, and for a moment I thought we had gone too far south. We hadn’t yet gotten off the bus, and the city was already screaming with movement, vibrancy, and life. It was beautiful, but where would I find fado amidst all of this?

That evening my friends and I dined at one of the many restaurants on Rua do Norte in the Bairro Alto district, famous for its chic shops and restaurants. Our restaurant, just like its neighbors, advertised live fado. The salmon salad coupled with traditional Portugeuese vinho verde was exquisite, but I was disappointed at the solo act who played unoriginal covers of American eighties songs. On the walk back to our hotel, student tuna bands with long black capes, charming voices, and an accordion serenaded us. A Brazilian man wearing a straw hat was set up in the center of the plaza pounding on three different drums and smiling furiously at the small children dancing before him. Still, no fado.

That night my friends and I ventured back out to Bairro Alto to explore Lisbon’s nightlife. The streets were so filled with people it was nearly impossible for taxis to get through. Music from around the world played from every direction. An advertiser coaxed us into a Cuban bar for drinks, where smooth salsa music swayed the hips of its patrons. We then hopped over to a discoteca and bounced up and down to techno.

Our last move of the night was to a small, packed bar where flavored tobacco smoke and body heat weighed down the air. Through the smoke I saw that everyone, young and old, was fixated toward the front of the room, as if in a trance.  In the very back two men sat in a spotlight—one was strumming a guitar and singing while the other drummed on the wooden block on which he sat. A slow, melancholic melody reached my ears. I instantly knew it was fado—Portuguese for “fate.” Although I couldn’t understand the words, I knew the story he sang was old and sad—one that resonated with every last person who swayed to the rhythm in a drunken stupor. They hung on with bated, smoky breath to the very last tearful note.

After the song ended, the mood abruptly changed to something upbeat and cheerful. People slowly shook off their nostalgia and got up to dance. It was four in the morning when the bar lights flashed signaling it was time to go home. The music ended. The musicians put away their instruments. But before stepping back out into the chilly night I followed suit as each patron went to shake hands with the musicians and thank them—a striking and unexpected show of the warmth that I later realized was typical in Portugal.

In that moment a portrait emerged before me, of a Portugal woven together by a long history of mingling and mixing. One that was rooted in colonialism, and thus inherently turbulent. It was in that brief encounter, under the cover of midnight, that I shook hands with the Afro-infused soul of Portugal named fado, that poured itself out in beautiful lamentations of the past, and given even further gravitas by the many whispered thanks for the beauty it had provided. 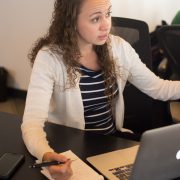 Danielle is a D.C.-born, Emory-educated communicator, thinker and creative community builder. She has a heart for social impact and strives to foster honest, open dialogue on critical global issues including race, gender, justice and democracy.

Discovering Monsanto: The Most Portuguese Village