Herald Square is about “being a tourist in your own city.”

The ironic fact is that when a visiting friend asks me for recommendations in the city, Herald Square is far from being a place that comes to mind, as it’s a tourist destination anyone can look up when they search up “New York City.” They want an “insider’s” opinion, the hole-in-the-walls you can’t get straight away from Yelp. And that said, for some time, I deliberately avoided the constantly congested area myself in what was perhaps arrogant New Yorker fashion, that I was better than to walk the street scrambles in awe and venture in souvenir stores. But of course, Herald Square is popular for a reason that even I understand: with countless shops, places to eat, and things to do, it makes for indulging in retail therapy, getting happily lost, and—dare I mention—being a tourist in your own city.

I had a friend who worked at the H&M there so that could be it, the start of this, I mean. While I was waiting for her shift to end—and it usually wasn’t until later in the evening—I’d aimlessly walk around the area to kill time, cooling off in department stores that ran down the avenue and cosmetic shops that came one after the other in the nearby K-Town. I converted quite a while back to getting most of my things online, avoiding long lines, but there is fun in happening upon something I like and buying it then and there, watching all sorts of customers go in and out of the stores, sampling swatches of makeup so I’d have a gradient of colors along my forearm, and trying on clothing as though it were a show.

When I want to take a bit of a break, though, from the commotion of shopping and the streets, I often end up in Karaoke Duet’s 35th Street location. As a side note, my friends and I have once been affectionately dubbed “karaoke gremlins”—in other words, we’re really big enthusiasts of karaoke. When we were abroad in Japan during the past fall semester, we’d stop by a karaoke place about weekly because it was affordable, the selection was endless, and it was cathartic to sing out any pent-up stress. Going alone, too, was quite common there; sometimes before returning home I’d have a little karaoke marathon with myself and leave feeling much lighter.

Anyway, before studying abroad in Japan, I had associated karaoke as being a group activity: a sing-along (or scream-along, rather) with your friends with the occasional solo or duet and therefore thought it strange if anyone were to rent a room for themselves to sing. The nice thing about doing it yourself, however—I discovered, once I got past the initial anxiety of going alone—is that there isn’t a single song you don’t know because you choose them all, no waiting for the next one, no stage fright. You can pick all the obscure songs if you want to or the same one five times in a row and experiment with your voice, that falsetto you didn’t want to try when you were with your friends and their plus-ones in case it didn’t turn out right. What’s especially wonderful about Karaoke Duet is that in addition to being cheaper on weekdays and the daytime, they offer karaoke marathons as well—six straight hours of singing (or less, if you want) for a flat rate, which, might sound extreme, but the time goes sooner than you think.

Involving less energy after a good karaoke session is settling in a cafe, and a little bit off the main Midtown attractions is Cafe Hanamizuki, an atmospheric, cozy Japanese eatery whose interior features a neutral color scheme, classical music playing idly overhead, and twinkling lights. It sort of feels like a respite from the city because of how quiet it is in comparison to the busy Herald Square, and the food is complementary to its peaceful ambience, which is to say it is hearty and light.

Cafe Hanamizuki specializes in omusubi, or rice balls, and when I last went I ordered a combo set which included two omusubi, two small side dishes, and miso soup. The presentation, much like the space, is beautifully minimalistic: I was presented a wooden tray containing a plate of freshly seasoned omusubi with brown rice and vegetables, little bowls of okra and Japanese pickles, and a larger bowl of mushroom miso soup. The meal wasn’t overbearing and left me feeling satisfied, and as I ate I basked in the sight of the little succulents on shelves, and trinkets decorating the cafe. 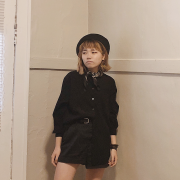 Sylvia is likely wearing a black beret. She's a fan of ruminating, admiring everyday design, and shopping at the dried fruit aisle in Trader Joe's (in no particular order) - sometimes all three at once.

All The Hottest Places In Midtown, NYC