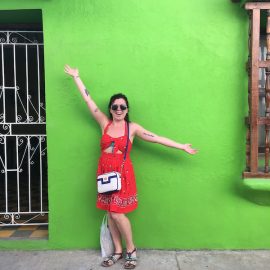 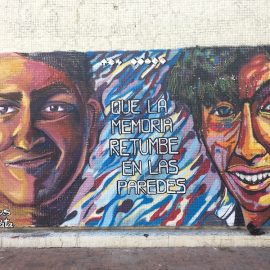 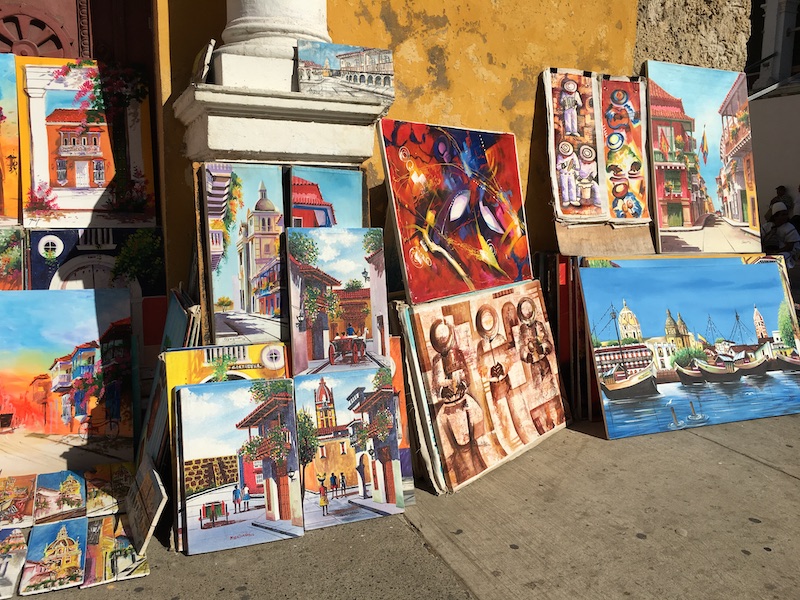 Vendors Selling Paintings on the Street 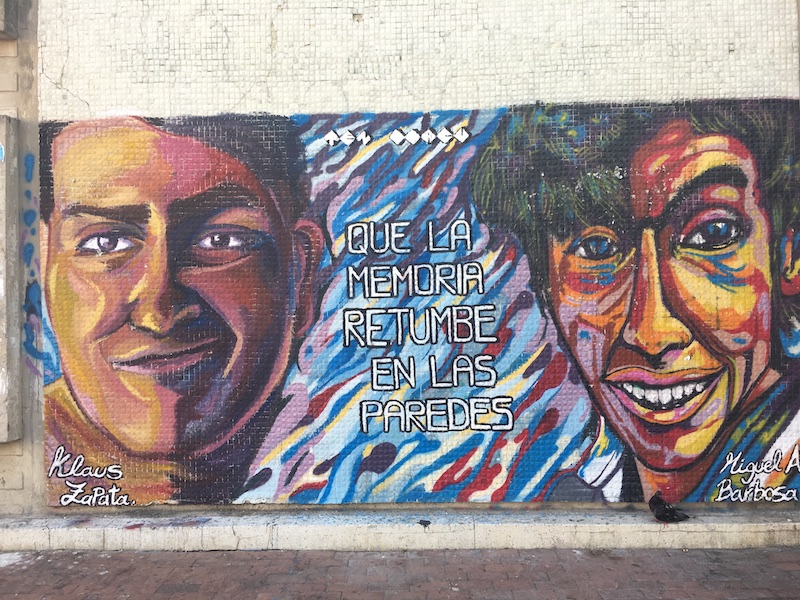 I was never meant to go to that Cuban restaurant, I was meant to be inspired by an 18-year old Colombian waitress.

I went to Colombia on a whim and had brought very little with me; a few dresses, some sportswear, one pair of flip flops, a pair of combat boots, and a bikini.  While roaming the streets of Cartagena on one sunny afternoon, I stumbled past Cuban 1940, the famous restaurant I had heard nothing but rave reviews about.  I was in ripped jean shorts, an orange tank top, and flip flops. I walked inside and decided to ask if I could make a reservation for later that night. They said they had space around 8PM, and seemed confused that I only needed a reservation for one. I immediately felt underdressed and out of place, and it wasn’t all in my head; they didn’t seem too welcoming that I’d be taking up a table for one in thrift-shop attire. Alas, they still let me make the reservation, and I had plans to head back later that evening.

I left the restaurant and felt a little uncomfortable, but headed back to my hotel to get ready before my big fancy meal. I realized I had nothing even remotely upscale to wear to this chic establishment. The best outfit I could muster up was a flowy blue dress that doubled as a beach cover up, and I had a feeling that would hardly suffice. As I headed toward the restaurant later that night, I stopped to watch some traditional Cumbia dancing with a mojito in hand, prepping for my Cuban-inspired night. Maybe it was the rum, but as I continued to head toward the restaurant, something in me felt like it would just be a night of discomfort. I am used to, and even prefer, grit and down-to-earth hospitality, and I am not saying you cannot get that from even the most upscale of places, but based on my minimal experience there earlier, and the insecurities of wearing a five-dollar oversized blue beach dress with beaded sandals, I thought, maybe I should skip the reservation and just wing it.  I seldom took myself out to a nice dinner, I didn’t want to waste the opportunity.

I felt a little bad about not showing up, but with the popular TripAdvisor Cuban 1940 reviews and the line that is known to be out the door, I have a feeling they didn’t have a problem filling my space. My stomach was starting to grumble, and I was ready for another cocktail. But where to go? As I circled around the streets, I kept passing this place with a black pig as the logo, called Pata Negra. I looked at the menu and it wasn’t exactly speaking to what I was looking for, and was neither Cuban or even traditional Colombian fare, but I was hungry enough to make some sacrifices. I was drawn by the pig logo because, at the time, I worked at a barbecue restaurant in New York City that also had a pig in its logo. I took it as fate. I walked into a nearly empty restaurant and found a table to sit at. I ordered a margarita and some overpriced ham croquettes, which were subpar at best. I contemplated grabbing my check and moving onward to finding yet another restaurant after my appetizer, but then I attempted to converse with my waitress.

I learned her name was Oriana. She did not speak fluent English, in fact, she hardly spoke English at all. But through miming, gesturing, and my minimal Spanish, I was impressed to realize we could communicate. I never studied Spanish and don’t even consider myself a “beginner” Spanish speaker, but between living in Los Angeles and New York City for a total of thirteen years, I’ve managed to pick up a few words and phrases which have apparently been stored in the back of my brain, reserved for a conversation with a kind Colombian waitress. After discussing what we could, such as, “What is your name?” “How are you?” “Where are you from?” I tried to think of a way to keep the conversation going. I asked her, “What is your favorite food?” in broken Spanish. She struggled to translate it to English, but I could tell the words were at the tip of her tongue.  I awkwardly laughed as she sat there and thought about whatever it is she was trying to say.  Then, I saw her eyes glimmer, as a lightbulb must have went off in her head. She reached in her apron, grabbed her notepad that she uses to write down orders, and wrote the following note:

“My favorite food is fish, rice and toston

You can eat it in ‘el Muelle Restaurant”

She handed it to me and smiled. Though she could not pronounce the words herself, she knew how to write. I held onto the note, thanked her, promised I would make it to el Muelle, and crumpled my new souvenir in my bag, and was left speechless.

This remains to be one of the most genuine connections and goose bump-ridden moments I have ever experienced abroad. Learning another language is scary and takes an absurd amount of courage. I was never meant to go to that Cuban restaurant, I was meant to meet Oriana and become inspired by an 18-year old Colombian waitress who had so much to offer not only the world, but this lone American traveler. 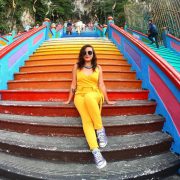 Your Cartagena Cheat Sheet For The Best Of The Best

The Hardest Part Of Traveling