Like every A-list celebrity, love them or hate them… everyone is talking about them. That is the United States summed up to the rest of the world.

My first time abroad I was stunned by how universal the United States truly is. I assumed this was dramatized but it’s overwhelming to witness. More often than not, walking into a bar or restaurant in a foreign country you will be greeted with the sounds of American music. I have walked down foreign streets and seen solely Hollywood movie posters. It’s important to understand the power your country has in the world and to also know this doesn’t mean the world revolves around you. Like it or not, you are representing your homeland while traveling outside of it. This has been heightened since our most recent election times 1,000. The difference between traveling as an American before and after the 2016 election is monumental. Which brings me to my first point..

As an American, you are suddenly the spokesperson for all things politics, foreign policy, economics, etc.

If I had a nickel for every time I’ve had this conversation:

“Where are you from?”

Instantaneously upon meeting someone you are thrown into a deep, political conversation with a perfect stranger. All “manners” are thrown aside. Since when is it okay to ask who someone voted for, much less a person you met five minutes prior? I do, however, authentically enjoy hearing the political opinions of people from different countries. It’s intensely eye opening to hear an outside, un-biased opinion. Everyone should have a politically based conversation with someone who lives outside of your country. Take this as an opportunity to share your beliefs while being open to hearing an opposing opinion. It will expand your mind and ideas in ways you never thought possible.

You quickly learn that while most everyone knows all there is to know about our government and recent election, we as Americans are predominantly uneducated on anyone but ourselves.

Ask the average American who the leader of Croatia is and they would look at you dumbfounded. However, I distinctly remember sitting in a tiny restaurant on a tiny Croatian island, weeks before the 2016 election, and discussing both American presidential candidates with the locals. When I began traveling abroad I had never felt more uneducated and embarrassed than when I was speaking with people from all over the world who knew so much about my country and in return I knew so little about theirs. Realizing how much of an impact your country has in the world is pretty overwhelming. As Americans we are raised and educated with the ideal of the American way being the right and only way. There are so many different ways of living around the world and just because they are different than yours does not mean they are wrong. You must have an open mind and be willing to learn from all of the cultures, politics, and religions you are exposed to once you leave your home country.

Be prepared to know your political and moral views and defend them over and over again.

They say “never discuss politics or religion”, but I think that’s taking the easy way out. Now more than ever it’s crucial to use your voice. Stand up for what you believe in and be ready to defend that. Everyone you meet will already have a preconceived notion of your country. You have the responsibility as a traveler to represent an entire country with each encounter you make. Don’t take that lightly.

You may not agree with your country all of the time, and that’s okay, but take pride in where you come from.

Being from the United States is exactly like having an annoying sibling. You can make fun of them all you want with no remorse, but the second someone else does… game over. How dare they? When you travel, you suddenly become a part of something bigger. You realize whom you represent in this world, and that is the United States. Your home. Your country. You just can’t help but love them even after all they put you through. 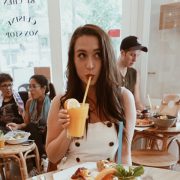 Hanna's a flight attendant, and her travel style is adventurous, spontaneous and always educating herself with an open mind. She can never travel without her journal and a camera.

The Different Ways We Self-Reflect