I wanted to find out what I was made of.

I’ve read recently that, “The brain on homesickness is much like the brain on grief,” — the stages and emotions are remarkably similar, and that makes sense. You are, after all, mourning the death of your former existence to a large degree.

My “existence” is now a life abroad and what an interesting, compelling chapter it’s making in my long, little book of life. I knew that being so far away from home and out in the big, bad world on my absolute own, would be my toughest challenge yet. But I wasn’t prepared for how indifferent I’d feel about what “home” really means.

It’s hard to deny that the act of moving across the globe for an extended period of time, fundamental changes you. Different parts of your personality sort of gloat to the top, you take on qualities, mannerisms and opinions that define the new world around you. Ones that you may not have discovered in yourself if you were back home.

This is the reason why I left home in the first place, almost two years ago to the date — to evolve, to change something, build a new perspective, put myself in uncomfortable new situations in foreign countries that would ultimately force me to gain a better sense of self and of the world.

I wanted to find out what I was made of.

You see back home in Chicago, I had so many built up webs of people, places, conversations, traditions, bars, dinner menus, weather…you get the idea. It felt like I had fallen under the same routine and I was never going to break free of it. The only way to escape was to, well… physically leave. And it’s been enormously refreshing and exhilarating to realize how much of “me” isn’t based on just my geographic location in Midwest, USA.

Moving abroad was basically starting from zero and rebuilding everything, finding comfort and balance, re-learning how to live and carry out every day activities like a child. It all fundamentally altered me. Yes, the new country and its culture obviously have their own effect on who I am and what I think, but few things are more profound than just starting over with the basics and relying on myself to build a life somewhere completely foreign again.

However, I did it. A handful of times now, in different locations around the globe. And I’m still doing it. But my GOD, are there some constant fears…

The biggest one being the fact that life is going on without me back home in Chicago. And the longer I stay abroad, the more intense that changes are occurring. Parties, festivals, get-togethers, elections, holidays, sporting events, the birth of my brother’s children, and their little, life moments — every event that I miss suddenly becomes a tick mark on an endless reap of paper. And I fear that one day, I’ll simply look back and realize that so much has happened in my absence, that it won’t be the same when I return. That I’ll find it harder and harder to start conversations with people who used to be some of my best friends, and those inside jokes they all have amongst each other will be foreign for me. I will become an outsider to a world I still very much want to be a part of.

The second biggest fear is being unable to push through the “home” cravings while being thousands of miles away from them. Sometimes, especially on the toughest/loneliest days abroad, I just need the smell my parent’s house again, a warm lick or two from my pup, a slice of my mom’s apple cobbler pie while curled up with one of her homemade quilts, the sound of my grandma’s laugh over a holiday dinner, a cruise along Chicago Lake Shore Drive with the windows down, music up and friends in the backseat, or just someone…anyone… around 24/7 who simply speaks the same language as me.

Sometimes these feelings and memories consume me so much, I question everything and why I signed up for a life abroad, and what I’m still doing thousands of miles away from the familiar and the people that would do anything for me.

So I’m looking at my life, and the regions that hold it (Chicago, South Korea, Spain, Hong Kong) and realize that I am now two distinct people. As much as my regions represent and fulfill different parts of me and what I enjoy about life, as much as I have formed unbreakable bonds with people I love in both places, I am divided in two. For the rest of my life (or at least it feels this way), I will spend my time in one place, nagging longing for the other, and waiting until I can get back for at least a few weeks and dive into that person I am in that destination. The girl I am at home in Chicago, and the girl I am on the road.

Like most travelers, I’ve realized that no matter where you are, you always will be longing for a past trip or new future place to discover. There will always be a part of you that is far away from home, living in full color in a new, unfamiliar place. And to live or travel in these new places is a beautiful, thrilling thing. It can show you that you can be and do whoever and whatever you want — on your own terms. It can give you the gift of freedom, independence, of new beginnings, of curiosity and excitement.

But to start over, to get on that plane and leave everything you know, including people you love, it doesn’t come without a price. You cannot be in two places at once, and from now on, you will lay awake (like I am tonight) and think of all the things you’re missing out on back home. 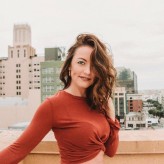 The Power Of Home In Cairo, A City You Might Not See

This Is How To Hire A Great Immigration Lawyer

How I Found Home While Living Abroad