I still consider this a great trip.

Things will go wrong, and that’s okay. In my humble opinion, the travel gods are going to wreck some havoc on whatever your plans are; you have to roll with the punches. Chances are, they are going to give more than they are going to take, and being flexible is all part of the process.

There are a few things that you can do, however, that can make a nightmare of a situation into your advantage. Here are my rules to follow when it really hits the fan.

1. Always book a flight in the morning

Yes, it’s sometimes hard to wake up to take a bus to a train to a taxi to a Ryanair flight in the middle of nowhere. BUT, if that flight gets cancelled, then you have the rest of the day to figure your plans out. Booking flights at night means that if the flight is delayed or cancelled, you run the risk of arriving (or not) to a city where public transportation has shut down and options are limited. It’s similar for super early morning flights (those before 8am). 10 o’clock is my favorite time.

Yelling at an airline attendant is certainly not the way to persuade her to get you on the next available flight. Smiling, asking how someone is, and generally showing a bit of kindness has helped me on more occasions that I can count.

3. Balling on a budget

Something is going to be more expensive than what you thought it would be, and it’s important to have a financial security cushion. On this trip, I ended up ending my work holiday seven days early, which means I have to pay for seven more nights room and board. But that’s ok, in the end, because I’m frugal and planned accordingly. The most expensive is not the best—in any situation—and taking the road less traveled is often the cheapest route. Spend less than you think you should and budget for more than you think you will need.

One of my buddies last year had to walk into the US Embassy in London with only a toothbrush because his backpack was stolen with everything in it, and he didn’t have a plan B. Keep important documents in a safe place and try not to flash them. If your traveling with someone else, have them carry your backups and you carry theirs. That way, if someone losses their bag, you will at least have one copy of everyone’s important information.

5. Give your family an itinerary and update it if it changes while on the road

6. Buy some Skype call credit or a local SIM card

Getting a new phone number lets you forget about international plans, and with Skype, $10 can last a very long time.

Pretty much everything is replaceable. But on that note, don’t travel with your great grandmother’s scarf. 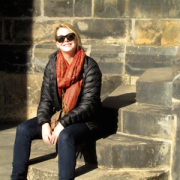 Annie's travel style is minimal and adventurous with a special love for local farmers markets. Out of all the countries she's been to, her favorite is The Netherlands. A UC Berkeley grad, she can't travel without her pair of Birkenstocks.

Hobbies That You Can Enjoy In The Home

Car Care Tips To Reduce Your Risks Of Accidents

How To Recharge Quickly After A Long Flight