The factual two-party system seems undemocratic from outside of the United States of America, in a world that is at its maximum of diversity and complexity.

Can you describe what Germany’s current state of its political climate?

Similar to the rest of the world, the voters historically fled to the extreme sides during times of crisis. In Germany, the political center lost many voters to the right wing, as well as to the green party (environment and freedom.) Populism and similar political currents are on the rise, not only from conspiracy theorists but also from the center of our society. As the alternative for Germany indicates an extreme right wing party has, a large majority of Germany votes for center and light left wing parties. You’ll see that the green party shows the biggest growth of all parties.

Are Germans passionate about the U.S. Presidential election? What do they say about it?

Germans in general are informed about the American elections, not only since the Presidency of the United States is arguably a position with the highest power in the world, but also the history and events that occurred after 1945. For example, denazification, Kennedy, East and West Germany…etc. In addition, America remains as the cultural head of the Western world. Social issues that occur in the U.S. – justice warriors, equal rights, gender equality – are often being held in Germany and Europe a few months after they’ve already been discussed in the States. So whichever direction the U.S. is headed probably matters to everyone in the Western world, if not everyone in the world.

For a European, the American Presidential election appears to be a wrestling match. A lot of show and money being tossed around, but there’s nothing substantial. It is more about having a good PR department than to engage in constructive discussions. Presidential debates do not rely on scientific information anymore (e.g. Trump) and in a state where the voter no longer receives real information, anything is possible. The fact that free education is not accessible in the United States may enhance this problem. The U.S. Presidential elections seems to be far more commercialized than they are  in Germany since candidates campaign for huge amounts of money, so it becomes a system which allows the economy to easily influence politics from the source. It values corporate interests over the interests of the people. Everything is being done to keep the American consumerism engine running so the cultural lead can be obtained. The factual two-party system seems undemocratic from outside of the United States of America. Even though there are more than two parties, in reality it just comes down to two options in a world that is at its maximum of diversity and complexity. One last thing,

Germans do not understand the system of electors.

The fact that a candidate can become president even though he did not have the majority of the peoples votes, lets us question the true meaning of democracy. That after the last two times this happened, questionable presidents were in charge.

How do you feel through these observations?

It’s sad to see the low niveau of discussion within the United States of America. Over time, the fronts have hardened so much that the opponents no longer communicate with each other. This can only be doomed to failure.

I hope that the U.S. will come through this election without bloodshed.

American citizens must question themselves if they want to continue living in a society where Donald Trump can become President again or not.

Is there anything else you would like to let American voters know?

Free education must be mandatory. Who would not want you to have free education, question that! Everything starts with free education! Free education leads to a higher level of empowered citizens who have a duty to question and make decisions based on scientific facts. 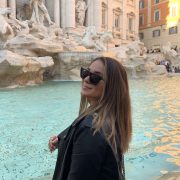