Are you way more into cutting edge?

Are you less enthusiastic about mainstream headliners and more into cutting edge alternative music? Then you have every reason to be super excited about Sziget Festival this year. Here are five bands I just can’t wait to see.

The indie rock duo of Alison Mosshart and Jamie Hince has seen on an upward spiral of success ever since their formation in 2001. After a 5-year hiatus brought about by Hince’s severe hand injury, the duo recently put out Ash and Ice, their most somber album yet that reached the UK 20 chart and was praised by fans and critics alike. The Kills’ brand of raw and catchy indie, combined with Alison Mosshart’s terrific voice and extremely powerful stage persona make them one of the absolute coolest bands performing today. Get ready to rock BIG TIME.

The Leicester rockers are back with their 6th studio album and are ready to hit the main stage. I saw them at Sziget twice, both times so vibrant and enchanting that I pledged to see them every time they play at Sziget.

Their newest album, rather melodic and downtempo, features the band’s softer side, but make no mistake, they will drop a ground-shaking party with essential festival hits like L.S.F and Shoot the Runner.

A winning cocktail of garage rock, Brit-pop and a whole range of other influences has made this Swedish alternative act one of their homeland’s biggest rock bands and a festival delight to audiences worldwide. Regardless of the fact that they’ll be playing in broad daylight, songs like “Dance with Somebody” will surely make the crowd go mental. Their energetic and amusing live performances are full of delight!

Since winning the prestigious UK Mercury Prize with their debut album just 5 years ago, Alt-J has become a household alternative act and festival highlight attracting ever-larger audiences. With multi-layered, folk-inflected dub-pop, soaring alternative rock and mesmerizing vocal and choir harmonies, Alt-J is one of the most innovative and groundbreaking bands working today. Their music is breathtakingly beautiful, grand, mysterious, awesome, explorative, and yet fully entertaining and even playful at times. Not like anything you have heard before.

One of the greatest rock divas of all time, Polly Jane Harvey simply can’t make a wrong step. Having shifted artistic personas several times – from raw and noisy underground rocker through big-city girl to folk-inspired protest singer – her musical output has remained intact and ever-evolving. Her latest two albums are tinted with political messages and social relevance, and feature beautiful perky melodies, somber tones and unique instruments such as xylophones and organs. Seeing her live will also showcase her unique capacities as a singer, multi-instrumentalist, songwriter and poet. It can easily be an overwhelming, soul-searching experience.

Have you ever been to Sziget? Share with us in the comments. 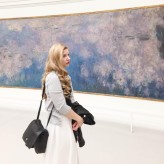 Dorina works as a fashion illustrator based in Hungary. She is a dreamer, always in search of new inspirations on her adventures. She can never travel without her watercolor kit!