The emergence of the anti-mask movement during the COVID-19 pandemic reveals division and hostility across the United States.

In January 2020, alarming first cases of COVID-19 in the United States quickly prompted school closures, social distancing guidelines, and the emergence of a strange protest against mask mandates, one which quickly gained traction and attention nationwide. A year later, the anti-mask movement still generates widespread debate, as it calls science into question and pushes politics to the forefront, but such resistance to safety protocols may have done more damage than we initially realized.

The anti-mask culture is mostly prevalent in rural and southern regions of the U.S., which managed to avoid the deadly virus due to small town populations and fewer opportunities for exposure and transmission. Many of these quaint areas enjoyed normalcy while the world around them screeched to a halt. They were unaffected by mask mandates and felt no urgency to practice social distancing even months into a global emergency.

When the first cases of COVID-19 began to infect their neighbors, residents of rural towns were suddenly subject to the same restrictions they had managed to avoid for so long. But rather than joining the fight to slow surging rates of infection, many resisted, shedding their masks on trips to grocery and home improvement stores in defiance of government mandates.

The mask controversy is primarily driven by passionate segments of the US population who view protective mandates as infringements on individual liberty. In other words, anti-maskers are defying ordinances just because they don’t like to be told what to do. Other barefaced shoppers and restaurant goers claim that they are unable to wear masks due to certain medical conditions that restrict their breathing, but medical experts argue that mask exemption cases are very rarely medically necessary. Uncommon examples of medical conditions that could legitimately be exacerbated by mask wearing include patients with advanced lung conditions who require extra oxygen, but because that population is at high risk for COVID, they should also be avoiding public crowds altogether.

During a politically tense year in the United States, the anti-mask movement was also perpetuated by former President Donald Trump and other conservative politicians, who were hesitant to mandate masks and less likely than Democratic leaders to wear masks in public. Donald Trump also mocked current President Joe Biden for wearing a mask and suggested that mask wearing could be construed as a political statement critical of him. It comes as no surprise then that the anti-mask culture thrives among conservative populations across the United States who threaten public safety in the interest of politics.

The anti-mask movement has become a trending topic on social media, where cancel culture seeks out damning narratives for remonstration and entertainment. Over the past year, countless videos of anti-maskers protesting ordinances and regulations in public have surfaced on social media. Some videos even show individuals throwing food on the ground in grocery stores or coughing on fellow shoppers who challenge their selfish refusals to wear masks and to follow social distancing guidelines. Though the pandemic will eventually end, and we will return to some level of normalcy, these alarming videos will remain etched in our memories, reminders of one of the darkest and most divisive periods of the 21st century.

The COVID-19 pandemic is not the only deadly outbreak to threaten the United States, but it is the first to break apart a once unified, connected society, and to drive segments of the nation into further isolation. The influenza outbreak of 1918 was marked by similar mandates and regulations aimed at preserving public health, but instead of fighting against government ordinances, nearly every citizen diligently followed each protective measurement to keep one another healthy and to return to regular, everyday life. On the contrary, the coronavirus has unveiled deeply rooted hostilities, showing how self-absorbed and inconsiderate The United States has become as a collective nation. In a time of healing and rebuilding, our growth is stunted by the reality that our problems will live on far after we shed our masks and step beyond the thresholds of our lonely confinement.

As life around us slowly returns to normal, we grieve for lives lost, for a year of existing without truly living, and for the scars that remain, which have been carved by division and anger. The anti-mask culture has become far more impactful than a statement made in the aisles of a grocery store. It proves that we have much more work to do before we can fully reconcile as a country to once again truly be the United States of America. 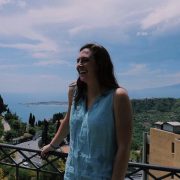 Layne is a Pennsylvania native who enjoys adventuring in nature, traveling, writing, eating, and spending precious time with her cat. Fluent in Italian, Layne jumps at every opportunity to explore the world around her, and she’s always planning for her next trip back to Italy.