Aggression and hustle in NYC turns into “ambition.”

Recently I was listening to The Daily’s podcast titled “A Bit of Relief: I Forgive You, New York.” While I wrote my own poem before I heard this 10 minute ode to the Big Apple from Roger Cohen, I’ve found both of these pieces to hold a kind of yearning for a tomorrow, where we are grateful for even the smallest of things or the most common, everyday sights, smells, and acts. Aggression and hustle in NYC turns into “ambition.” The rats on the street are beautiful because they are a part of our natural system of life, as necessary as cherry blossoms blooming in Central Park.

This quote has stayed with me during quarantine:

“We overwater a plant and it dies. Love is like death because it is so strong.”

Perhaps this time is to realize who is really there. Which connections are the strongest, and which connections need more work. This time feels like the seven stages of grief in a way. We are all mourning something. But maybe in the future we can turn this love into even more abundance, where we take time in bettering our relationships instead of working 24/7. The “cease of our city’s hum” will return. And we need to take it in like a new breath, a new start, and a new birth of opportunity instead of obstacle.

to give birth to a child.

But right now there is a sound sizzling

every night at 7 pm

for doctors, nurses, everyone

everyone on the front lines

City as an entire

City stopping to make the same motion at the same time:

A 45-year-old mother clapping while her tomatillo soup sings, her engagement ring a ballet not of being found but of finding someone who sees

A 98-year-old great-grandfather clapping, standing at his window with his bent cane, glasses so unfogged and unafraid it hurts a little to open wider

for pieces of the body to choose themselves

They have always known

Our dangling limbs touching each other

so more people can touch

There is a plant named bougainvillea.

I am naming my daughter

the daughter we are all growing during this time—

we call Monday afternoons at the office, we call nights sipping wine with strangers, nothing will taste bitter again

Bougainvillea will thirst to say thank you, anytime, anywhere, with anyone

Bougainvillea will feed on firsts, a feast of anything, anyplace, any moment, anybody

Because we have forgotten how starved we have been.

How a quarter of an inch of butter

did not mean a thing.

Sleeping next to someone.

Holding my grandmother has been a decade of drought and all the water is yelling at me “Do it now! Do it now.”

We are in battle. This

battle. To prove that Bougainvillea is a climbing plant

even when the dictionary says its flowers are “insignificant” and cannot move.

To prove that we are not machines

Our papery green thumbs were once

born as thin sheets of metal, once

gloved and greedy, masked and eyeless,

Our thumbs were shields

and be breathed into

We have forgotten that a fly can still find its fire

even in capture and we are that fly.

Bougainvillea, you are blind now,

you will photograph this world

in its most naked state of being:

no one is there

as its own word. This. 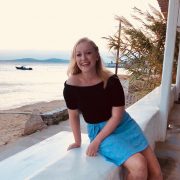 The Importance Of Transparency During The COVID Pandemic

10 Things You Didn’t Know About The Rockefeller Christmas Tree