"Yesterday, I learned that bubbles have no age limit."

"you belong where you feel free"

"Another day another auto"

"This is one of the 7 wonders of the world. Her name is Grace. Just kidding, it's the Taj Mahal! Also shoutout to my mom for giving me a very prominent forehead vein. Thanks @cindyobrienaesthetics"

Memories and images are captured, like an ongoing art form, a living diary.

This is one of the 7 wonders of the world. Her name is Grace. Just kidding, it's the Taj Mahal! Also shoutout to my mom for giving me a very prominent forehead vein. Thanks @cindyobrienaesthetics

The Instagram handle @gracegoingplaces caught my eye a few months ago. Scrolling absentmindedly through the popular page, one photo in particular stood out; a sharp snow covered peak, a cluster of pines, and a striking teal blue pool resting at the base of the photograph. Maybe it was my mind’s desire to escape my dreary Sunday morning studies, or simply the high-quality photography, but I decided to follow this Instagram none the less.

Only shortly after hitting that follow button, Grace O’Brien, student at the University of San Diego, embarked on her Semester at Sea, which I and 3,000+ other followers were so lucky to follow along side. Traveling to nine different countries via ship, Grace took classes and received college credit. Prior to this experience, Grace had traveled outside the country to the Caribbean, Mexico, France, and England. Yet through Semester at Sea was able to visit, Italy, Greece, Germany, Spain, Ghana, South Africa, India, Myanmar, Vietnam, China, and Japan.

When I asked Grace about her Instagram in particular, she explained she intended to shape a more travel and photography based blog before she embarked on the journey. Social media has become such a controversial topic of our age. When something becomes such an integral part of society, one cannot help but wonder: is this thing going in the right or wrong direction? However, when it comes to travel, social media and Instagram in particular, evolved to hold a vital role in the industry. Successful travel Instagram’s spark an interest and plant the idea of travel in people’s minds who may have otherwise never even considered it. The famous saying, ‘a picture’s worth a thousand words’ could not be more fitting to the situation. A travel photo taken and posted on Instagram could catch any users eye, just as Grace’s photo caught mine. Rather than one hearing a story from a friend or reading an article in a magazine about an exotic location, Instagram peaks the viewers interest with just one photo on a feed. The world is quite literally accessible at our fingertips. Further, local hotspots, restaurants, neighborhoods, valuable information is accessible to those who know where to look.

For Grace, one of her favorite things about developing her travel Instagram, was the ability to share with the world, the places she had been and the people she had met along the way. In a world where information on all levels is so accessible, why not make genuine travel experiences accessible as well. Traveling to Paris is so more than seeing the Eiffel Tower, if used in the right way these personal travel Instagram’s, such as Grace’s, open people’s eyes to this fact.

I asked Grace to describe one of her favorite travel memories. She described her six-day trip to China, specifically a memorable Thanksgiving dinner at a small sustainable hotel called the Brickyard (located in Mutianyu, China). The snow falling, the locals waving, and the array of travelers huddled around the table, she remembered every detail so clearly. Anyone who has traveled remembers those certain days, hours, weeks of even moments that were so vivid the memory seems to never fade. It is those exact moments that when we come home and tell stories of our travels, we can never quite capture with words. Yet with an account like Grace’s these memories and images are captured, documented, and presented, like an ongoing art form, a living diary.

As Grace wrote so eloquently,

“Traveling doesn’t always mean getting on a plane.”

Further, traveling doesn’t always, in fact, almost never, means having the most picture-perfect experience. If anything, traveling is about the delayed trains, the bad restaurants, the long, lost walks, the slightly shady hostels, the swollen feet, and the absolute shame you feel when you realize you stick out like sore thumb. Because these moments make the good restaurants, spontaneous live music, and friendly waves from the locals all the more valuable.

So, the next time you hop in your car for a weekend getaway, or pack you backpack for a trip around the world, grab your camera, or phone for that matter (they take equally as good or better photos now) and ‘gram’ a couple pictures along the way. While a photo may not be as good as the real thing, it will keep a heck of a lot of people entertained for time being and hopeful for their own future travels.

A huge thank you and shout out to Grace and her Instagram @gracegoingplaces! You have an amazing outlook on the world and an amazing blog through which you express your experiences so well!

For every purchase, a portion of the proceeds will fund Designers Against AIDS to help raise AIDS awareness in the international media and towards the general public. 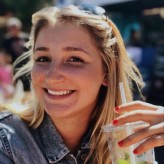