Boston is forever a resilient, cultural and headstrong city.

I often forget that traveling within a country, notably the US, is oftentimes as incredible as visiting a country in the opposite hemisphere. Without even mentioning Alaska and Hawaii, the west coast to the east is as comparable as apples to oranges. Having been a native Californian for much of my life, visiting Greater Boston was as foreign to me as an European country.

Wanting to become acquainted with the people, weather, architecture, and overall ambience; I spent a half day jogging around Cambridge. I took a detour through Harvard before making my way to the Charles River. Not only did I see Boston’s skyline on the opposite end of the waters, I witnessed MIT and Boston University’s crews practicing for an upcoming regatta. I ended my jog at the MIT campus before making my way back home.

If I could only describe Cambridge in three words, it would be: cultural, beautiful, and headstrong. It contains century-old homes and historical landmarks. It is filled with diverse ecologies and gleaming wildlife, separated by a proud river. Lastly, its residents comprise of level-headed folks who are ambitious and confident in unique ways.

In light of the recent tragedy, I wanted to share my personal observations during my limited stay in the Greater Boston area. I saw a city with such a rich culture, prideful of their sports teams. I saw a city filled with great history, proud of their intellect and reason. What I saw was an unwavering community centered on great norms and values. My time in Boston was an ephemeral but terrific week, all thanks to the city and the people. 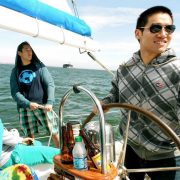 He was born and raised in Orange County, southern California. He graduated from UC Berkeley, studying political science with a concentration in international relations. In his free time, Andy frequents exercising, spectating eSports, meeting new people, and learning new things.

For $10, You Can Spend A Night At Dunkin’ Donuts Airbnb

4 Of The Best Rooftop Bars In Boston

4 Of The Best Boozy Pubs To Celebrate St. Patrick’s Day In Boston

3 Most Popular Boston Neighborhoods For Millennials