Enter the world of witchcraft and wizardy with this magical guide.

Traveling to London can be a Harry Potter fan’s dream come true. With major movie landmarks to explore and a highly anticipated play to see, enter the world of witchcraft and wizardy with this magical guide to Harry Potter’s London.

1. Go on the Official Set Tour at Warner Bro. Studios.

If you’re a die-hard Harry Potter fan then the number one thing you should put on your to do list is visit Warner Bro Studios and take “The Making of Harry Potter” set tour. You’ll be able to see hundreds of authentic props, beautiful sets, original costumes that the actors wore, and more. You can even get interactive and fly your very own broomstick, ride the hogwarts express, or pretend you’re running through the wall at Platform 9 ¾. Try to get into one of the first few tour times of the day because it will be less crowded and you’ll have an easier time exploring everything. At the end, don’t forget to visit the shop and pick up a wand or set of house robes!

Buy tickets here! (They must be purchased before going to the studios, you can’t buy tickets on site).

If you can’t make it to Warner Bro. Studios to see Platform 9 ¾, a great alternative is to visit Kings Cross station. They have a replica of a luggage trolley embedded in the wall in the station concourse (unfortunately there are tracks separating platforms 9 and 10) that you can take pictures with and pretend you’re off to start your own wizarding journey. Be warned, there’s usually a long line you have to wait in in order to snap that instagram worthy picture, but if you have the time it’s totally worth it. It’s open 24 hours a day, so going earlier in the morning or late at night might give you a shorter line. There’s also The Harry Potter Shop right there where you can find all sorts of Harry Potter merchandise for sale.

3. Travel Around London and See the Major Landmarks From the Movies.

With Platform 9 ¾ off your list, there are some other major landmarks you should hit that are featured in the movies. You can see them one of two ways. You can either take the award winning 2.5 hour Muggle Walking Tour that will take you to see most of the movie locations, or you can pick and choose the places you want to see and travel around London on your own time. If that’s more you style, be sure to include some of these recommendations in your tour. The Reptile House at London Zoo (seen in The Sorcerer’s Stone), the Tower Bridge (seen in The Order of the Phoenix) and Millennium Bridge (seen in the opening part of The Half Blood Prince), Leadenhall Market (used for Diagon Alley), and Claremont Square (used for 12 Grimmauld Place).

4. See Harry Potter and the Cursed Child at the Palace Theatre.

Are you really a true Harry Potter fan if you haven’t read Harry Potter and the Cursed Child? This highly anticipated eighth Harry Potter book-turned-play can be seen on the big stage up until October of 2018 at the Palace Theatre in London. Tickets are unfortunately a bit hard to come by, but as of right now a further three months of advance tickets will be released for sale on Saturday 16 September 2017 for performances from July 25 to October 21 2018. If you can’t get tickets that way, more tickets will be available with regular ticket releases through the year. Look for details on that announced on the official website, social media channels and the official newsletter. If you can’t make it all the way to London, you still might have a chance to get your Potter fix, as the play is coming to Broadway this Spring. Registration for ticket access for that will open on October 1.

5. Take a Trip to See Harry Potter and Fantastic Beasts Graphic Art at House of MinaLima.

Miraphora Mina and Eduardo Lima are the designers of the artwork of the Fantastic Beasts and Where to Find Them and Harry Potter movies. This means they are behind the delicate scrawl of Professor McGonagall’s Hogwarts acceptance letters, the Hogwarts express tickets, and more. They are putting all their fantastic artwork on display in an exhibit called “House of MinaLima.” We’re talking three floors of authentic Harry Potter and Fantastic Beasts props, prints, and artwork, all within a small house that looks like it came straight out of the movies themselves. The best part? Entrance to this amazing place is free and unticketed! It’s a must do if you’re in the West End of London. 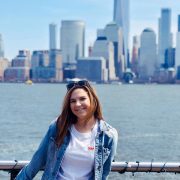 Mackenzie is a Connecticut native who loves finding the next big adventure. She enjoys cooking, dogs, and relaxing on a beach with a great book. If you want her heart, you find it on top of the Duomo in Florence.