Known as the Rainbow Nation, Cape Town is definitely a city I knew I didn’t want to miss.

Before boarding the plane, I was consistently fantasizing about the different types of people I would meet and party with. I wanted to blend in with the locals as much as possible and avoid sticking out like a sore thumb, but that wasn’t the case. As soon as I strolled out of the airplane and into the airport, I knew I was outside of my comfort zone.

Having the natural tendency to search for familiar faces, I started to get anxious of my surrounding environment. From someone asking if I needed help with my suitcase to getting into a public transportation other than Uber, I knew at that moment I was secretly regretting my decision to travel alone.

As I stepped into the shuttle, the bus driver asked me slowly and loudly where my destination was. At first I was puzzled, why was he speaking to me in such a slow pace and high tone? But then I realized he probably thought that English was not my first language. He tried conversing with me and asked which part of Asia I was from. Initially I was stunned by this stereotypical question, but I responded politely telling him I was born in America and my parents are Chinese. He followed up with more questions about my culture like, “What do Chinese usually eat? Is it true that they eat dogs? What do you guys do for Chinese New Year? Are there a lot of parades?” Shockingly, all his questions did not bother me and I answered every one of them cordially.

Throughout this trip I encountered many locals who made assumptions about my cultural background. I stopped finding them irritating, and realized that I enjoyed people coming up to me with their questions about these stereotypes. This whole trip helped me to understand that I can’t blame people for asking questions, especially if their only interaction with Asian culture is through the media. I would rather have people come up to me with open minds, and ask me such questions to learn about my culture, than develop false impressions from misinformed people.

The biggest takeaway from my travels in Cape Town is that stereotypes are just misconceptions formed within people’s mind to unfairly categorize them, and we shouldn’t be so closed off to people as to not be able to scrutinize these stereotypes. So, next time you travel do not be offended when someone inquisitively asks about your background. Be open to their questions and let them understand the truth of who you are. To understand one another is to be open-minded, respectful, and to ask thoughtful questions. With that mindset, you will discover the most beautiful people in the world. We should always appreciate and respect those who are willing to learn about others, and we, as travelers, should always return the favor. 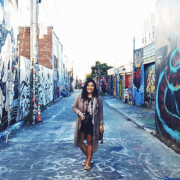 France's travel style is super fast-paced and she's always with a camera on the lookout for the next go-to. South African will remain in a very special place in her heart. There are two things she can't travel without: an extra memory card and dry shampoo.

8 Great Hikes To Do In Cape Town

How To Drive The Garden Route In Under A Week