From bungee jumping to kayaking by gorgeous waterfalls on the Garden Route.

The Garden Route stretches along the Southern coastline of South Africa. The route stretches from Cape Town in the West all the way to Port Elizabeth and East London along the East coast. The route can take anywhere from a few days to a few weeks, depending on how many coastal towns and tourist attractions you want to see on the way. While there are countless tour groups that you can pay to take you along the route, it is more than do-able on your own with a full car of friends!

The Garden Route is a great way to get to see South Africa, as well as check off tons of bucket list items! From bungee jumping off of the highest bridge bungee jump, to kayaking, to gorgeous waterfalls, to catching some waves in the famous Jeffreys Bay, the Garden Route has something for everyone.

I drove the Garden Route with a few friends on my second week after I had moved to Cape Town. We are all students at University of Cape Town, so naturally we wanted to see as much of the Garden Route as we could by spending the least amount of money possible.

This first leg is one of the biggest driving days, with a total of four hours in the car. The best way to tackle this drive is by adding some beautiful stops along the way, such as Betty’s Bay. Betty’s Bay is along the coast and is known for its penguins! Boulder’s Beach is the well-known beach home to a large penguin colony, but Betty’s Bay has just as many adorable penguins to see with less tourists. If penguins and beaches aren’t your style, a fantastic day hike that takes a few hours is the Crystal Pools hike just after Gordon’s Bay. There are a total of three stunning pools along the hike up into the mountains, and the National Park they are located in is breathtaking in its own right.

Once you arrive in Mosselbaai, there is plenty to do between hikes, beaches, and restaurants. If you’re eager to get there, you can skip the stops along the way and head straight to Mossel Baai to have a full day swimming at the tide pools on the beach or hiking the cliffs along the coast between Mossel Baai and Dana Baai. If you want to experience an authentic South African braai, or barbecue, definitely head to Kaai for Braai downtown and watch as fishermen bring in their daily catches that are then cooked into delicious curries before your eyes.

To get the most out of the Garden Route, try to get an early start each day. The group I was traveling with was a group of adventurers, so we woke up at the crack of dawn to fit in a day of Sandboarding down Dragon’s Dune in Mosselbaai before hitting the road.

The drive from Mosselbaai to Wilderness takes one and a half hours, with plenty of time to lounge and explore the area on both ends. Wilderness is by far the most charming and beautiful place I have been to. Wilderness is an area up in the mountains above the ocean, with a river running into a lagoon cutting down through the canyon. We rented an Airbnb called Libertas Farm House up on a hill overlooking the bay. From there, we hiked along the Brownhooded Kingfisher Trail, and then cooked a group dinner from fresh produce we had bought at a farm stall in town.

The next morning, we went kayaking in Tsitsikamma, along the river that spills out into the ocean. Upstream, after about forty-five minutes of kayaking, the river becomes too shallow and narrow to continue paddling. You dock your kayaks along the riverbank, and hike along the riverbed for twenty minutes or so until you come across the most beautiful waterfall and pools to swim in. Make a day of it and pack a picnic lunch to enjoy there! The water is filled with minerals and is a beautiful amber color. After our day at the waterfalls, we drove a short forty minutes to our next stop, Plettenberg Bay. This coastal town is absolutely stunning, and is a great spot to eat seafood along the beach.

The next morning in Plettenberg Bay, we stopped on our way East in Nature’s Valley. Nature’s Valley is a short drive from Plettenberg Bay, and is filled with beautiful hikes, farm stalls, and rolling green hills. It is located halfway between Plettenberg Bay and Jeffreys Bay. The main attractions here are the Salt River hike and Natures Way Farm Stall. The farm stall is filled with incredible local foods and goods, and is a ten minute drive from the tallest bridge bungee jump in the world, off of Bloukrans Bridge. I recommend stocking up on a beautiful picnic and taking it with you to the bungee center off the side of the bridge.

The adventurers in the group can bungee jump off of the bridge, while the rest can enjoy the views of the bridge and canyon from the rest stop, inside of the cafe where you can watch a live stream video of the bungee jumpers over the canyon.

After the Tsitsikamma Forest, where the kayaking and Bloukrans Bridge are located, the final leg of the trip heading East is from Nature’s Valley to Port Elizabeth. The driving time is 2 hours, which can be split up with a stop in Jeffreys Bay on the way. Jeffreys Bay is a world-famous surf spot known for its killer waves, which can be enjoyed from in or out of the water.

Port Elizabeth is a big port city and was our final eastward destination of the Garden Route. We stayed along a river and spent our time tidepooling and exploring the port city. We even saw an octopus in a tide pool along the beach! From here, depending on how how much time your group has to drive the Garden Route, you can add a few days and head as far as East London or even the Transkei up the East coast. The most wonderful part about the Garden Route is that there are no set places or time frames for the trip. We met many travelers that allotted months to driving across the southern coast of South Africa, taking days to weeks in each location and really getting to know the area. You can get whatever you want out of the Garden Route, which is what makes the adventure so special and filled with adventure; no two trips are the same.

From Port Elizabeth, we drove 3 hours to Oudtshoorn, which is inland from Knysna. This area is known for its vast ostrich farms, hidden waterfalls and ancient caves. Oudtshoorn is a quaint town in the desert, and provided us with a wonderful change in scenery from our week exploring the different beaches of coastal South Africa.

In the morning, we drove to the Rust en Vrede Waterfall outside of Oudtshoorn, and then took our last stop at the Cango Caves. Both pit stops are worthwhile. The waterfall is a very short hike, less than twenty minutes, but the road to get there takes a little while of driving off road. The caves go into the mountain for over a kilometer, and include an adventure tour in which you can slide down multiple tunnels in the caves.

Home sweet home in Cape Town is just four and a half short hours of driving from Oudtshoorn back, and then you have officially driven the Garden Route in under a week! If you are pressed for time on your trip to South Africa but want to see as much of the country as possible, the Garden Route is the best way to do it. If you have lots of time and would like to see as much as possible, I recommend spending a few nights in each location and extending the final Eastern destination to the Transkei to incorporate some of the most breathtaking views of South Africa.

So, if you are ready for a nature-packed road trip adventure, grab your friends and a car, and hit the road! 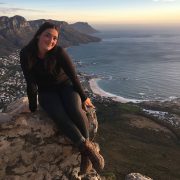 Zoe has been an avid traveler her whole life. She grew up in California, has lived in Spain, and is currently living in South Africa. Zoe has traveled to over twenty countries, and does not plan on stopping any time soon. She loves being outdoors, and her passions include photography, diving, backpacking, and rock climbing.

8 Great Hikes To Do In Cape Town