These Moroccan cities will give you completely different perspectives on a colorful culture. Let the adventure begin.

Just in case you’re planning a trip to Morocco completely from scratch and already feeling overwhelmed, this article will save you from major stress sweat! You’re probably asking these questions: Where to go? Which Moroccan cities are the most popular? How do I fit in so many places in ten days? This list will answer your questions in the most simple form.

First, here are some tips! Since Morocco has a longer shape, it can be time consuming to travel from north all the way to the south especially if you only have a week of vacation. Focus on one area, if you want to stay in the…

Remember that you’ll most likely fly into Casablanca (where you can visit major sights in 24 hours,) then really kick off your trip from Marrakech which is centrally located so you can choose to move north, south or stay central after Marrakech. Have fun and enjoy!

Marrakech is considered as THE must-visit city in Morocco. It’s the fourth largest city, located in the center of the country. Marrakech is a favorite among jetset Europeans as the perfect destination for weekend getaways. The Jemaa el-Fnaa is one of the most famous squares in Africa and the city also has the largest Berber market/souks in Morocco. Fashion designer Yves Saint Laurent’s Majorelle Garden and the beautiful Agdal Gardens along with notable mosques are only some of many things to do in the gorgeous Marrakech.

Fez is the third largest city in the country and was the Moroccan capital until 1925. Fez has been called: “Mecca of the West” or “Athens of Africa.” Fez is a UNESCO World Heritage Site and is one of the most well-preserved old cities in the Arab-Muslim world. It’s becoming increasingly popular among travelers, with attractions including: the main medina, Bou Inania Madrasa, Al-Attarine Madrasa.

Rabat is the capital of Morocco and the second largest city. It’s situated on the Atlantic Ocean between Casablanca and Fez. Important industries in Rabat include: tourism, textile, food processing and construction. Here are a few fantastic landmarks to check out: Mausoleum of Mohammed V, Hassan Tower, River Bou Regreg, Kasbah of the Udayas, Chellah Necropolis…and more.

Famous for its blue houses, Chefchaouen attracts seasoned photographers and solo travelers. The shade of blue is a tradition which derives from the town’s former Jewish population. Although The Blue City of Morocco is known as the capital of cannabis in its country; travelers can go hiking, swimming and wanderlust through gorgeous alleys. Chefchaouen is situated in the Rif Mountains, just inland from Tangier and Tetouan.

Located on the North African coast, Tangier is a poetic city sitting where the Mediterranean Sea meets the Atlantic Ocean. The city’s multiculturalism of Muslim, Christian, and Jewish population has captivated the hearts of literary and musical artists, including: Truman Capote, Paul Bowles, Tennessee Williams, William S. Burroughs, George Orwell, Allen Ginsberg, Jack Kerouac, Brion Gysin and the Rolling Stones. Eugène Delacroix loved Tangier, as did many painters and artists, for the effects of natural colors and light in the city.

Casablanca is located in western part of Morocco. As the chief port and industrial center, Casablanca plays an important role in Africa’s economy. Casablanca makes the perfect day trip, since you’ll most likely be arriving at the airport here and this city has the beautiful and world famous Hassan II Mosque.

For other things to do, read more on 10 Must-Do’s So You Can See ALL Of Casablanca In 1 Day.

Essaouira is located on the Western part of Morocco and is a favorite for independent travelers and backpackers. Essaouira was loved by Jimi Hendrix and Bob Marley duringthe 60′s because of the city’s relaxed beach town vibe. Essaouira’s medina, fish markets and the scene at the docks are travelers’ favorites.

Agadir will probably remind you a little of California, which is why Europeans have loved making surf getaways to this city. Located in central Morocco, Agadir is under the radar for most people, but if you love the water, this is a must-go. The view of the city and the bay from Agadir Oufella (Casbah) is breathtaking while Moroccan souks and mosques will keep you very busy sightseeing. For more things to do in Agadir, check out 5 Things to Do in Agadir: Morocco’s Most Underrated City.

Ouarzazate is near the south-center of Morocco. A touristy destination known for Hollywood filmmaking. Lawrence of Arabia, The Mummy, Gladiator are some famous films that were made here. Ouarzazate has been called “The Door of the Desert.” The city is known for the magnificent Aït Benhaddou which is a fortified village (aka: ksar). Also a UNESCO World Heritage Site, Aït Benhaddou is absolutely worth the trip. 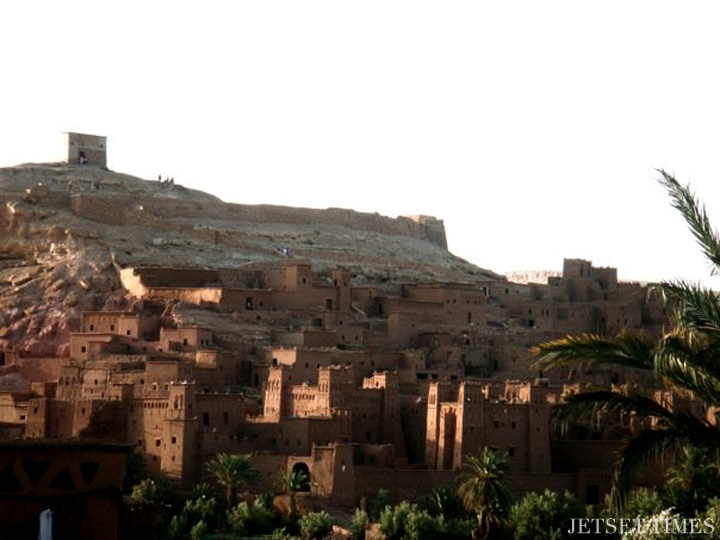 Jebel Toubkal National Park has North Africa’s highest peak at 4,167m (13,667 ft) making it the challenging but beautiful conquest for adventurous climbers. If you’re in a rush, you can try to go up then get back down in a day. To take in the full experience, however, many suggest spending 3 days in Jebel Toubkal. The peak is located in southwest region of Morocco, 63 km south of Marrakech.

Many travelers have said looking at Marrakech from above as the plane is landing is a memorable sight of a Pink City. Then Dades Valley is another think pink moment on the edge of a cliff. Located between Jebel Sarho and High Atlas Mountains, you’ll catch the most spectacular view of traditional Moroccan forts. Dades Valley is one of them. In midst of your road trip, make sure to find a vista point and stop the car to take in the scenery. You can also stay in the area for a night as many hotels have been developed.

More travelers are taking notice of this small town oasis in the south of Morocco because of the luxurious Sahara experience that local guides offer. A personal favorite is Chez Le Pacha, a tour which takes travelers deep into the desert via camel rides. An overnight stay in the desert includes a tent set up comfortably by the guides who will also cook dinner, play drums and sing underneath the Sahara starlight. It might sound extremely touristic, but I guarantee this is an unforgettable experience to last a lifetime.

Meknes is a city in northern Morocco and was the capital of Morocco in 1672–1727 during Moulay Ismail’s reign. Since Meknes was an old capital, the city remains to boast various well-preserved sites: Mausoleum of Moulay Ismail (see photo), Bab Mansour, and Dar Jamai Museum. It’s a medieval city in midst of modern Morocco, and Moroccan bazaar is much less confusing than Marrakech’s while you can still discover great finds without feeling overwhelmed.

Merzouga is a small village in southeastern Morocco, 50 kilometers from Algeria border. You’ve probably never heard of Merzouga but it’s great for an overnight Sahara experience if you’d like to stay more central. Check out Kasbah Mohayut for planning an overnight Sahara trip which will cover Moroccan food, camel ride, tent…etc.

Most Romantic Cities To Go With Your Bae

8 Moroccan Fashion Designer Boutiques You Can Shop & Browse At