The ride lasted about two minutes (Monaco is so very tiny) and cost about twenty euros. Classic Monaco.

“What do you want to do today?”

A friend and I took a weekend trip to Nice, France. Life can be good sometimes. We spent the 48 hours in the Côte d’Azur beaching, boozing, and buying an excessive amount of souvenirs. We believe in spontaneous adventures, so on our last day in Nice we actually decided to skip town and head to Monaco for a day trip.

We checked out of our modest hotel and dragged our luggage and tired bodies to the nearest grocery to grab some chocolate croissants before heading to the train station. We checked our luggage into storage at the station and caught the next train to Monaco. Several picturesque coastal towns flickered across the train windows, and about 20 minutes later we were there.

Monaco is unreal. It is impeccably clean, unbelievably small, and fantastically grand. Opulent yachts were docked along the harbor, the roads marked the route of the Grand Prix, and the taxi drivers drove Bentleys and Mercedes-Benz. While wandering through the wide streets and luxuriating in the atmosphere, we encountered a city guide. He informed us that there are two places one must see in Monaco: the Oceanographic Museum and Monte Carlo Casino.

At this point in the day we had about two and a half hours until we had to catch our train going home. We rushed uphill to the Oceanographic Museum first. It was no surprise that the museum was decadent since Albert the First, Prince of Monaco, founded the museum. It devoted three floors to the study of the ocean. One floor housed several species of marine animals, another floor told the story of Monaco’s relationship with the ocean and hunting, and the last floor was dedicated to sharks. We spent a little too much time at the museum so we were forced to sprint to the Monte Carlo. Granted, the casino was only about a mile away, but that mile seemed to stretch on forever as we rushed down the street.

When we finally arrived at the Monte Carlo, a gaggle of luxury sports cars were parked outside. Classic Monaco. There is no admission fee to enter the casino, so we got in line for complimentary entrance tickets. By the time we entered the casino we had about seven minutes to explore before leaving. We quickly shuffled through the luxuriously thick carpet and ogled at the grand playing tables. After making a lap of the painfully exquisite and beautiful first floor, we had to rush out. We were quickly running out of time to make our train, so we ran through the streets until we found a kind cabbie in a black Benz to take us to the station. The ride lasted about two minutes (Monaco is so very tiny) and cost about twenty euros. Classic Monaco. I’m glad to report that we made our train (back to the real world) with minutes to spare. 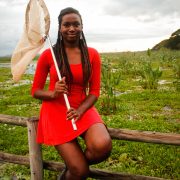 After living in Costa Rica for quite some time, Sofia developed a travel style that is "expect nothing, embrace everything." She loves Spain. When she travels, she can't live without...clean socks.

Monaco On A Budget? It’s Possible!

The Difference Between Black Beauty In America & In France

How To Get The Morning After Pill In France

How A Jetset Times Writer Hits Her Parisian Stride