Cancun is filled with much history and architecture but there are also so many interesting facts about Cancun that people don’t know about. Here’s a list of some!

1. The Cancun beaches are only 14 Miles long.

There’s no shock that this party city is small. The beaches are even smaller!

2. White sand beaches are made of crushed coral.

Since the beaches are made with crushed coral, the sand is never hot no matter how high the temperature is!

3. There is an underwater museum in the ocean.

Cancun took museums to the next level by opening up a underwater museum with tons of sculptures to look at while snorkeling.

4. Cancun has the deepest waterhole in the world!

Cancun has many cenotes, which are waterholes. These waterholes are thousands of feet deep. One of the largest and longest ones in Cancan and in the world is 134 miles long.

5. You can watch baby turtles go into the sea from your resort beach.

The staff at many resorts have guests watch turtles with them. You can see the baby turtles hatch and go into the sea! The employees protect these animals by not allowing guest to go too close and not allowing them to touch the sea creatures.

6. There were only 3 residents when Cancun was first developing.

In 1970, only 3 people were living in Cancun, who mostly took care of coconut plantations. Today, there are more than 700,000 residents in Cancun.

Since Cancun is shaped like a number 7, guests at the hotels have both a beach and lagoon view. Essentially everyone on the peninsula has a good view.

With there being 4,674 hotels to choose from on the small peninsula, there are plenty of rooms for people to book and get a taste of Cancun.

9. Best time to visit Cancun is between November and April.

The best time to go to Cancun, Mexico is between November and April because that is when the sun will never leave the sky! It may be very crowded during these months, but if you want a tan during the winter, Cancun is your destination.

Before Cancun was Cancun, it was called Ekab by the Mayan people. The meaning behind the name Ekab is “black earth.” 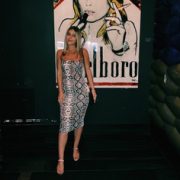 Anastasia loves exploring the world, animals, reading books, writing, fashion, and laying on a beach on a hot summer day. She has explored most of the United States, some European and many Caribbean countries. She loves being in new places, trying authentic food, talking to locals, and living in the moment.

Here’s Your Complete Guide To Cancun

3 Areas To Shop ‘Til You Drop In Cancun, Mexico

DRINK: Top 3 Bars For A Night Out In Downtown Cancun

STAY: Top 2 All Inclusive Resort To Feel Right At Home In Cancun