Buenos Aires, known as the Paris of South America, is a city fostered to satisfy all kinds of indulgences. From fulfilling die-hard sports fans’ fantasies to satiating experimental foodies’ taste buds, there’s a piece of Argentina fit for everyone’s travel alter ego.

The city carries influences from many parts of Europe and is known for an ultimate happening nightlife. Traveling to Buenos Aires can become overwhelming with too long of a checklist to complete. For a straight-forward guide to what you need to do in BA, here’s a list of must-dos for the perfect vacay.

1. Dine at a closed-door restaurant, either at I Latina or Casa Felix.

Puerta Cerrada (closed door) is the latest trend in Buenos Aires’ dining scene. Think of a home-cooked meal, a professional chef, tasting menus akin to Michelin standards and all in the comfort of a private home. Not too costly at all, even with wine pairing. These restaurants require reservations (which you can make online), once dinner is ready, the restaurants close their doors for diners with reservations. Two of my personal favorites include: I Latina (Murillo 725, Villa Crespo, Buenos Aires 1414, Argentina) and Casa Felix (Address given upon reservation, but it’s in the Chacarita neighborhood).

One of the world’s most beautiful cemeteries rests in Buenos Aires. You can find many notable graves at Cementerio de la Recoleta including those of: Eva Peron (which isn’t as easy to find, so ask around), Carlos Pelligrini Bartolome Mitre, Domingo Fuastino Sarmiento (all three were Presidents of Argentina), Eduardo Wilde (writer)…and many more.

If you’re visiting La Recoleta on a Saturday or Sunday, then you should also head to the street fair at the park next to the cemetery. A huge variety of tents will be set up, perfect for you to buy souvenirs then chill on the grass for live music. Munch on street food at the fair, and if you run out of cash, there’s ATM next to Starbucks. Note: the fair doesn’t start until noon. 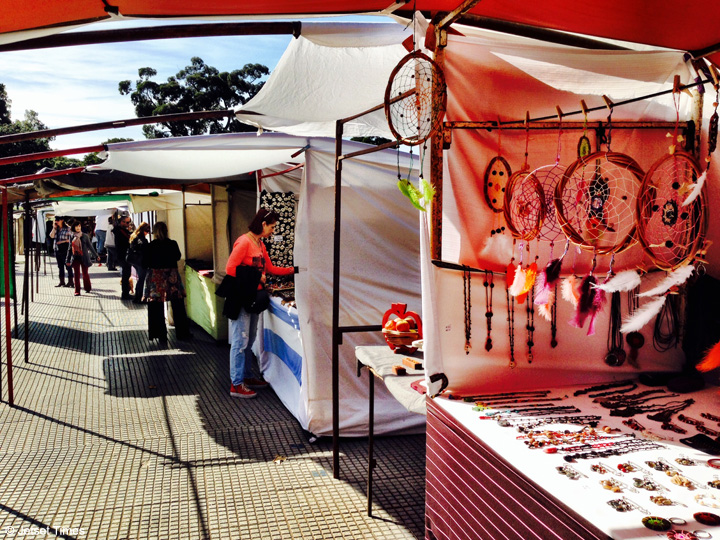 One of the most beautiful bookstores in the world is right here in BA. Located on Santa Fe Avenue, the eclecticist building was originally designed in 1875 by architects Peró and Torres Armengol. It opened as a 1050-seats theater in 1919, referred to as: Teatro Gran Splendid with frescoes on the ceiling painted by Italian artist Nazareno Orlandi. Later, the theater was converted into a cinema then into a music and bookshop after the year 2000. Today, there are chairs throughout the bookstore, it’s a unique experience to visit and browse through the gorgeous aisles.

A trip to Argentina wouldn’t be complete without the flair of tango. In 2009, the art of “touch” (latin: tango) was officially approved by UNESCO as a part of the UNESCO Intangible Cultural Heritage List. The sexy partner dance originated in 1890s in Rio de la Plata (between Uruguay and Argentina), today it can be experienced mainly in Argentina, Chile and Uruguay.

6. Spend a few hours at Malba.

Museo de Arte Latinoamericano de Buenos Aires (Latin American Art Museum of Buenos Aires) is one of the most fascinating museums in Buenos Aires as it often hosts highly anticipated exhibitions such as Peruvian fashion photographer Mario Testino’s “In Your Face” in 2014. You can also find Frida’s famous self portrait on the second floor as well as the works of Argentine painters Xul Solar, Emilio Pettoruti, Antonio Berni and many more.

The sport of polo is heavily instilled in Argentine culture mainly due to early British settlers in the country during 1800s. Try to catch a race (free) at Hipódromo Argentino de Palermo which is one of the most prominent horse race venues in the world and located right in city downtown. Polo seasons are March – May and September – December. You can watch them at Campo Argentino de Polo for $25/person.

If you really want to get in the polo spirit, consider a day trip at Argentina Polo Day, located 45 minutes away from Buenos Aires city center and you’ll get to learn how to play polo yourself. They will arrange transportation to the club and back.

Nightlife in Buenos Aires starts VERY late, typically around 2:30 and goes on until way past dawn. You’d want to devote a few nights drowning to the beats of world renowned DJs and downing delicious cocktails. Most places can get jam-packed by 4am, if that’s too crowded for your taste but you still feel like indulging in BA’s late night scene, we recommend grabbing drinks at Milion (high class old mansion) and Congo Bar, then end your night clubbing at Unicorn Huset.

The “Pink House” is not only the most photographed building in Buenos Aires, it’s also the presidential palace of Argentina. There’s a tour you can take to observe the interior of the building, including: The President’s office, Christ the King Chapel, The Stained Glass Gallery, the hall of Busts, The Salon Blanco…and much more. The building also houses a museum which has free admission. Stare at the balcony and you suddenly can’t get #Don’tCryForMeArgentina out of your head. 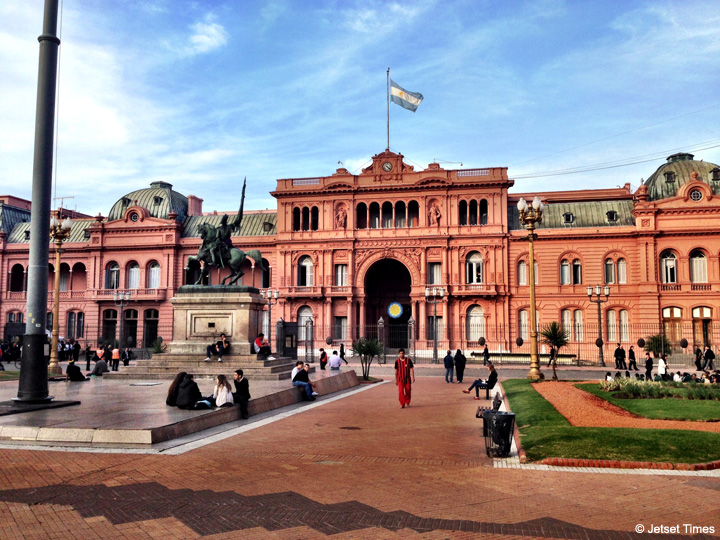 10. Learn all about Evita at Museo Evita.

One of the most controversial figures in Argentine politics and cultures has to be Eva Perón, second wife of Argentine President Juan Perón and First Lady of Argentina from 1946 – 1952. The museum showcases Evita’s life, her sense of fashion, her stance on labor rights until the end of her life. The museum also has a lovely restaurant, perfect for brunch before or after your visit.

Wanna get some shopping done? Head over to Palermo Soho, a specific area in Palermo district that houses fashion designer boutiques, art galleries and outdoor restaurants. Ask the cab driver to drop you off on Gurruchaga Road (cross street: El Salvador Street or Costa Rica Street), then you can start to wanderlust and window browse through various shops. It’s named after the Soho districts in both NYC and London, so expect similar fusion of fashion, art and local cuisine here.

It’s all about the blue and yellow in Buenos Aires with infinite spirit for the Boca Juniors – the city’s reigning football (US: soccer) champs. La Bombonera (Chocolate Box) is the home stadium to Boca Juniors. It’s also situated in the vibrant district called: La Boca. Walk around in the colorful neighborhood before/after the game, you’ll encounter tango dancers and art exhibitions. Chill out at Convetillo Bar just across the street from the stadium. Even if you’re visiting during off season, the stadium is a treat to check out.

5 Reasons To Visit The Capital Cities Of Latin America