The view from 13,000 feet – Chele La Pass is one of the most prominent peaks in Bhutan.

At 13,000 feet (4,000 meters), the view from the road on Chele La pass is spectacular. On a clear day, such as the one we were blessed with, one of the most prominent peaks in Bhutan. While only the 79th highest peak in the world, Jomolhari is arguably one of the most recognizable because of its distinctive shape. It is positioned on the northern border of Bhutan, where it meets Tibet. The popular lore in Bhutan says that the snow on Jomolhari has never melted completely during the warmer seasons and that in the event that the summit’s rock is exposed, the world will come to an end. Given that the farming people of western Bhutan rely entirely on snowmelt from the north, this loss of snow would surely provoke calamity.

If you are in good shape and don’t mind the thinning air that such altitudes bring, one can hike for an hour and a half from the road further up Chele La in order to get a 360-degree view of much of western Bhutan. We decide that this view is well worth the effort and climb through the prayer flags and through alpine yak pastures until we arrive at the pinnacle. The small groups of tourists and Bhutanese day trippers are but mere specks near the road far below us and we are grateful for the solitude and unparalleled beauty that our effort has rewarded us with.

We reluctantly turn back and descend towards the road, wishing to stay in the clouds for just a while longer. The descent goes quickly and we are soon back at the car. After warming up with some tea, rice porridge, and momos (dumplings) from a small food stall at the pass, we begin our descent into the Paro valley. We follow the main road for twenty minutes before veering off onto a rugged dirt road which is blocked before long with a sign warning of a bridge out ahead. Getting out of the car, we lace up our boots for another hike. Our daylight is waning so we decide to take the most direct route and begin climbing through the woods, meeting the road on occasion as it switchbacks up the mountain. Out of breath and with burning legs we arrive at Kila Gompa: Bhutan’s oldest nunnery nestled in isolation among the cliffs below Chele La pass. The nuns here are in the midst of their evening prayers so we quietly pay our respects and begin our descent once more. We make excellent time to the car and continue into Paro valley for the night to get a hot meal and a good night’s rest for our travels are to continue the next day. 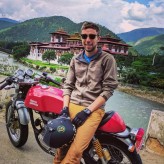 It’s Not Too Late To Learn These 15 Activities

How To Get To Antarctica

10 Reasons Why Everyone Should Kayak

Best Time To Climb Kilimanjaro: Some Tips To Plan Your Unforgettable Trip

Things To Know Before Taking An International Boating Trip