One of the cabins at the Canmore Alpine Club of Canada.

One of the smaller ski runs in Sunshine Village.

Trying out one of the new lifts with pull down capsule and seat heaters at Sunshine Village Banff.

Getting away in Winter Wonderland

After visiting the Rocky Mountains in Canada for the first time 4 months ago at the height of summer, I was excited to see it again and get a taste of the mountains in Winter. Over the last several years, I’ve regularly attended screenings of the Banff Mountain Film Festival when it would come to Brisbane, Australia and have grown to love short films about adventure trips into the mountains. So after joining the Alpine Club of Canada and hearing that my buddy Deb was taking an Avalanche Safety Training course the ACC were running out of Canmore, we booked a couple of nights in dorms at the Canmore Clubhouse.

SEE ALSO: Why Winter Might Be The Best Time For A Cross Canada Road Trip

Driving up from Edmonton after work on Friday night with snowboards and skis packed, we chatted with Lexi, another course attendee car pooling with us for the four hour trip.

We got to the clubhouse as the end of year Christmas party was in full swing, checked in and wandered over to cosy cabins on the ridge looking out to the range across the valley. The bunk rooms were warm and the club provides sheets, bedding and great kitchen facilities, in a relaxed environment. Note: non-members can stay at ACC club houses (a bunk will set you back about CAD$40) and enjoy the excellent facilities.

After a quiet beer in the lounge while playing scrabble followed by a good night’s sleep, we made a quick stop at The Summit Cafe, a locals favourite in Canmore for coffee and one of their amazing cinnamon scrolls.

Day 1 of the AST course, was theory, which meant that the girls would be in class all day, so I set off solo. I gravitated to Sunshine Village ski resort just outside of Banff as a powdery snow drifted down in the early morning fog.

Walking into the resort I was greeted with a cup of hot chocolate by staff braving the -20c temps near the ticket booths. Renting snowboard boots, I chatted to a couple of staff and just about everyone I spoke to turned out to be Australian. There’s something about Banff that is a magnet for Australian’s in their 20’s and it seemed like 90% of the resort employees were Aussie. Word gets around!

The first few runs down the mountain were a little tentative as I got used to the extra flex in a split board and tried to make out the peaks and flats in the fog. Though early in the season, the resort was covered in a thick beautiful blanket of snow and I steered the board through the powder between the trees at every opportunity.

By the afternoon, the place was living up to it’s name, with the fog dispersing and the temperature climbing as the sun bathed the resort in daylight. I lapped up as many runs as I could before enjoying an Elk Burger and a Cesear (the classic Canadian cocktail similar to a bloody mary but 10 times better for the inclusion of clam juice).

After a few more runs warmed by the alcohol in my blood and a couple of inglorious stacks (crashes), I decided it was time to stop hurting myself and pick the girls up from the course. I cleaned up at the club house and we headed to Banff for dinner at the St James Pub. They do great food and a glass of the Granville Island IPA is not to be missed for beer lovers.

The next day was a field day for the AST’ers and the plan was to head up to Bow Mountain. Having rented back country skis for this trip, it sounded like this would be the perfect place to get out and test them.

The drive out to Bow Lake was icy and felt sketchy, the old Icefields Parkway living up to it’s name. It was hard to reconcile the views I was seeing with pictures in my head from August as we drove the same road coming from the south.

After a few helpful hints from the Mountain Guides running the Alpine Club course (like how to set my skis and boots in walk mode) I set off by myself up the hill, with a vague map in my head. I was traveling light, with no pack, water or compass, the main goal being to have fun and test the skis while not dying of hypothermia or being buried by an avalanche.

The Peyto Lake Lookout circuit, was a great place to test out the skis while getting into the woods and the view from the lookout is stunning. The skis acted as oversize snowshoes, as I used skins for traction on uphills and speed control on the descents. After traversing the trail both ways and spending a bit of time observing the avalanche training in action, I decided to warm up on the 30 minute drive back to Lake Louise where I could have lunch and plan my next outing.

Sitting around the clubhouse the previous evening a salty old adventurer named Dan had told me about a trail leading up to the Jimmie Simpson Bowl behind Bow Lake. And after doing a little online research I worked out the route I would take. This turned into a solid two hour adventure skiing solo across the north end of Bow Lake and up to Glacier Falls. The expansive vista as I crossed the lake heading into the valley between Jimmie Simpson and Bow Mountains was stunning. A beautiful and fitting end to an epic weekend in these most glorious of mountains.

Where’s your favorite travel destination during winter? Share with us in the comments. 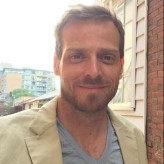 Michael is a tech nomad, raised in Asia, seasoned in Australia and now based in North America. He is Inspired by outdoor adventures and meeting new people.