Just so you’re not overwhelmed with too much to do in Paris! 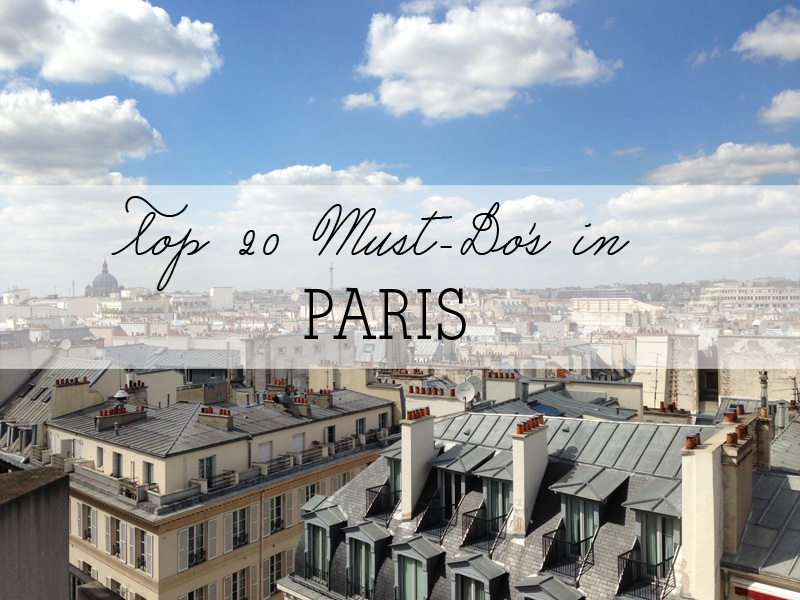 It’s your first time in Paris and all you’re thinking about are tourist hotspots, except there are a million of them in the city. Here’s an overwhelm-free rundown of must-sees to ensure a trip packed with ohlalas!

1. Watch the sunset from the Eiffel Tower

Going during the day, you’re sure to be standing in line for hours along with every other tourist on the planet. So, your best bet is to Eiffel at 8pm. You’ll be standing in line for about 30 minutes then enjoy more than two hours of views at different levels (since it closes at 11pm). And you’ll want to save that much time for it, because there will be lots of climbing, snapping pictures and people around.

2. Spend a day at Le Louvre, because it takes a day.

One of the world’s largest museums in the world is also, considered by many, as the most important museum. Louvre Museum is situated in the center of Paris in the 1st arrondissement, and houses over 35,000 objects from prehistory to the 21st century over an area of 60,600 square meters. During the late 12th century, it was originally established as a fortress. Today’s museum is embellished by the famous Glass Pyramid designed by renowned architect I. M. Pei. To name all the must-sees in Le Louvre is difficult as there are too many, but don’t miss: Antonio Canova’s Psyche Revived by Cupid’s Kiss, The Venus de Milo, and Leonardo da Vinci’s Mona Lisa.

Considered as the world’s best example of French Gothic architecture, Notre Dame de Paris (Our Lady of Paris) was a groundbreaking phenomenon during the mid-1300s, setting itself apart from the previous Romanesque era. Go inside the cathedral and gaze at the stained glass windows, especially the one above the organ. You can also climb up 387 steps to catch an up-close view of the gargoyles that act as rain diversion devices.

Besides its authenticity of residing in an old railway station on the left bank of Le Seine, Musée d’Orsay specializes in neo-impressionism art. Most art fanatics revisit to appreciate works from Monet, Degas, Gauguin, Van Gogh and Cézanne. Don’t miss the reproductions of  Opéra Garnier, and a maquette de Paris which is a miniature of Paris’ floor map so you can step foot on Montmartre and hop over to the Eiffel Tower in the next second. Also, “Apples and Oranges” painting by  Cézanne is a must-see.

5. Drink a glass of wine at an outdoor cafe

Paris is known for its galore of cafes, and to people-watch while drinking a glass of Bordeaux is a must-do. In between museum visits, rest your feet at any outdoor cafe. Note: steer away from ones in tourist areas as the menus tend to up-charge. Only make an exception if you’re at Cafe de Flore or Les Deux Margots in Saint-Germain-des-Prés. Both were frequented by writers and artists including: Simone de Beauvoir, Jean-Paul Sartre, Ernest Hemingway, Albert Camus, Pablo Picasso, James Joyce, Bertolt Brecht.

This is going to be a heavy day of touristy vibes, but you’ve just gotta go with it and mix it up a little bit. The key is to walk around on your own. When you get off the metro stop: Blanche (line 2), walk up Rue Lepic where you’ll pass by Café des deux Moulins (where Amelie was filmed). You can either start your day at a cafe or end it with a glass of wine here.

Keep going on Rue Lepic, you’ll see Rue des Abbesses where a left turn leads to walking through windy streets (pass by Van Gogh’s house) but a right turn is a road full of shops, restaurants, fromageries, boulangeries. We highly recommend starting your day with a left turn, then hike up the hills. You’ll pass by charming houses, and through windy alleys in ten minutes, you’ll reach the Basilica of the Sacred Heart of Paris, or Sacré-Cœur Basilica. Sit on the steps for a few minutes, enjoy the view of the entire city.

7. Then see a show at Moulin Rouge

Moulin Rouge was built and established the same year as the Eiffel Tower in 1889. It has survived two World Wars and multiple economic crisis. Evolved with time, it has become more international with its clientele as well as its dancers. The 60 dancers on stage comprise of 14 nationalities, with Australians, English and the French as dominant groups. The show is comprised of a series of cancan dances in elaborate costumes. You might be surrounded by masses of tourists but the show is full-on entertainment.

SEE ALSO: Interview with Moulin Rouge: Sparkling Glamour with a Wink of Naughtiness

The “Triumphal Arch” was built to honor soldiers who died in honor of France during the French Revolutionary and Napoleonic Wars. It’s situated in the center of the Place Charles de Gaulle and you can also see it at the end of Champs-Élysées. The world-famous landmark is 50 meters (164 ft) in height, 45 m (148 ft) wide and 22 m (72 ft) deep. Located beneath the Arc de Triomphe is Tomb of the Unknown Soldier with an eternal flame remembering the soldiers who died but were never identified.

9. Browse and shop in Le Marais

Le Marais might be known as the “gay district” in Paris, but if you want to shop the right way, then do it here. Exit the metro: Saint-Paul (line 1), then get lost in tiny alleys in the district. Doesn’t matter where you go, you’ll find one-of-a-kind boutiques of clothing, jewelry, designer brands, furniture. This is also a great hub of antique and vintage shops.

10. Then check out Musée Picasso, also in Le Marais

NOTE: Museum is currently closed for renovation but will open on October 24th, 2014. It’s easy to wanderlust and lose yourself in Le Marais, but a must-see destination is Musée Picasso which carries over 5,000 works of art by Picasso. You’ll see his personal works on paper, ceramics, sculptures in wood and metal and, of course, many of his celebrated paintings. During his life, Picasso was also an avid art collector who loved: Degas, Cézanne, de Chirico, Matisse and Rousseau. These works are also displayed throughout the museum along with many pieces that Picasso made later in his life (after his 70th birthday).

11. Have a night out at Club Silencio

Designed by David Lynch, Club Silencio is where all forms of art melt unintermittedly. From movies, design, architecture, to fashion. Lynch wanted the underground private members club, to be a place full of possibilities. In the club is where Justice, the French electronic duo, recorded their very first album. The club is exclusively for members prior to midnight with exhibitions and events that require memberships. But after midnight, the club is opened to the public with outstanding cocktails and an epic music scene.

SEE ALSO: Interview at Club Silencio in Paris: Where All Forms of Art Cross Paths

12. It’s all about the water lilies at Musée de l’Orangerie

Located near the Tuileries Gardens and Place de la Concorde is Musée de l’Orangerie, which focuses on  impressionist and post-impressionist paintings. Fan of Monet? This is where you can see his famous eight Water Lilies murals which you can find on the ground floor. As Monet intended, the murals are shown in direct diffused lighting and are displayed in two oval rooms. The gallery also showcases works of Matisse, Picasso, Renoir, Rousseau, Cézanne, Modigliani, Sisley…and many more.

13. Bring out the local foodie in you and head to a marché (Paris food market)

There is something so fantastic about a Parisian market. Check out the freshest meat, vibrant colors of vegetables and fruits competing for your appetite. You’ll meet locals who shop at these marchés on a daily basis. As a traveler, buy some favorite fruits to devour back at the hotel. If you’re prepping for a picnic, get a few sandwiches and cheeses. A cozy dinner back at the hotel sounds like a fab idea? Rotisserie chickens at any farmers market is incredibly simple and DELISH!

14. Visit the tomb of Oscar Wilde at Père Lachaise cemetery

One of the most beautiful cemeteries resides in Paris’ 20th arrondissement. Père Lachaise cemetery is the first garden cemetery, the first municipal cemetery and the site of three World World I memorials. Highly recommend to enter the cemetery from Gambetta metro station, as soon as you exit, you’ll be on your way directly to Oscar Wilde’s tomb, then stroll through the rest of the cemetery from there. Other famous tombs include: Jim Morrison, Édith Piaf, Frédéric Chopin…and more. 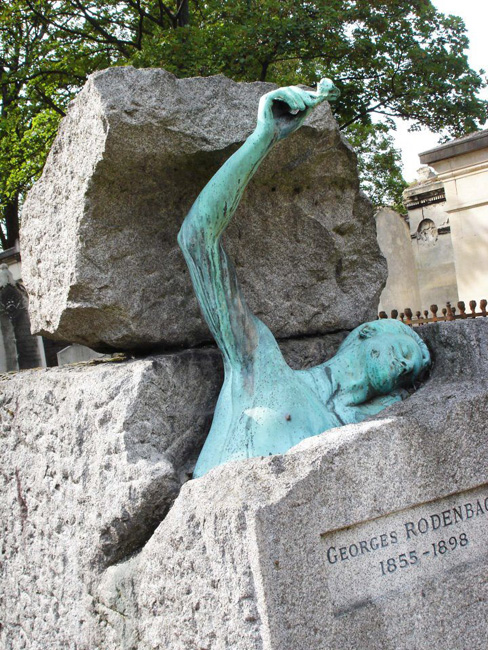 Locals call it “Beaubourg,” but both names refer to the same contemporary art museum that welcomes 8,000 visitors per day. Part of its appeal lies in its consistent and changing exhibitions. It’s safe to say that Beaubourg offers vastly different experiences on a monthly basis, it’s a constant surprise and always staying true to its solid foundation of creative modern art.

16. Stroll through the Jardin du Luxembourg

Remember in Victor Hugo’s Les Misérables? Where  Marius Pontmercy and Cosette first met was right here in Jardin du Luxembourg, which is also the second largest public park in Paris. The park also sets the scene in William Faulkner’s Sanctuary and Henry James’ The Ambassadors. Spend an hour or two to stroll through the serious of gorgeous gardens, the Medici fountains and over a hundred statues and monuments.

Local Parisians’ favorite pastime, so you won’t feel touristy doing this at all! Our favorite spot is near Pont Alexandre III (Metro: Invalides) Grab a bottle of wine, prepare some charcuterie(cold cuts), cheese plates and you’re set! Even if you’re traveling on your own, bring a good book and a sandwich. You’re guaranteed to have the most serene yet memorable Paris moment!

As if “The Kiss”, “The Thinker” and “The Gates of Hell” aren’t enough, Musée Rodin is also one of the most romantic museums in the City of Lights. We highly recommend heading there on a weekday, at approximately 3:30pm or 4pm, this will provide enough time to walk through the entire museum then stroll through the back area where a fountain and beautiful gardens reside. Do this walk around evening hours, and it certainly will be one of your top memories of Paris.

19. Grab a drink and sit by the Canal Saint-Martin

The perfect summer pastime. If you’re staying anywhere in the Bastille or République area, you’re sure to come across this 4.5 km long canal. Canal Saint-Martin connects the Canal de l’Ourcq to the Seine River. There are numerous bars and restaurants along the canal where you can either enjoy a meal or grab a drink. Let’s state the obvious, it’s also a fantastic place to people-watch. My personal recommendation for a great meal by the river is Chez Prune (36 Rue Beaurepaire, 75010 Paris, France).

20. Get your shop on at Saint-Ouen flea market

If you’re in Paris on a Saturday, Sunday or Monday, make sure to visit marché aux puces, or flea market, to sift through a great selection of antiques and second-hand furniture. Saint-Ouen is the biggest flea market in the world and is frequented by designer Philippe Starck, many fashion editors and celebrities. The vendors at the market are serious dealers who only rent their spots for a minimum of three years. Open hours: Saturdays 9am to 6pm, Sundays 10am to 6pm, Mondays 11am to 5pm. Once you exit the metro station, keep following the sign “les puces” (flea) and keep walking for a few blocks to Rue des Rossiers and you’ll see it.

How Disneyland Paris Changed My Mindset