It’s so much more than braai in South Africa! 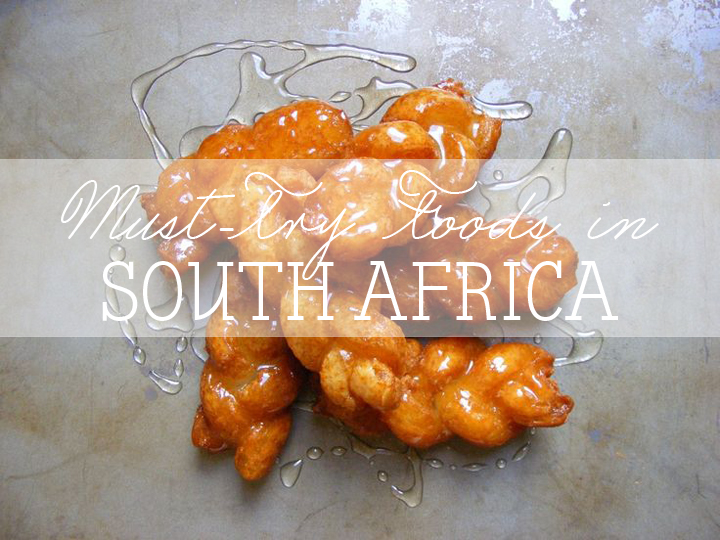 Heading to South Africa and you have no idea what to order on the menu? Whether you’re in Johannesburg or Cape Town, food is a huge part of its multiethnic culture. You’ll encounter influences from the Dutch, the Zulus, the Portuguese Indians and the Cape Malays. If anything looks out of the ordinary, don’t ever say “gross”, just remember you’ve got to try it at least once. With a glass of fabulous South African wine in hand, everything will go down nice and easy!

If you love a good clay pot dish, potjie kos literally translates to “pot food.” It’s a traditional way of cooking prevalent throughout southern Africa that was first brought to the area by the Dutch back during the 17th century. This is a delicious way to make stew in a cast iron pot.

A South African dish with spiced curry, minced meat and baked with an egg-based topping, mostly served with pilaf rice. And we must mention, boboti is also the national dish of South Africa!

Aka in Zulu: to burn meat. But, the food is never actually burnt. Shisa Nyama is South African townships’ terminology for describing the coming together and sharing of food cooked over fire. In Cape Town, you’ll probably want to visit a popular Shisa Nyama called “Mzoli’s Place” (Ny 115, Cape Town 7751, South Africa) located in the heart of a township named Gugulethu. The food will be cooked using wood and coal for real smokey taste, and you’ll socialize with folks from different nationalities to eat with great music. Buy some meat at a butcher shop at the venue then grill away!

It’s basically brandy and coke. The locals love it and call it “Klippies and coke” since they tend to use Klipdrift brandy as a mix. You might hear others call it Karate Water since those are some crazy moves you might be busting after a few drinks.

We’ve got hot dogs and South Africa has Boerewors Rolls which are just as delicious if not even more addicting. The name comes from the Afrikaans words boer (“farmer”) and wors (“sausage”). South Africa’s version entails Boereworse (sausages from ground beef,  ground pork and lots of spices) barbecued to local perfection. Expect to whiff amazing aromas like coriander, cloves, nutmeg and black peppers.

If you’re in Cape Town or Johannesburg, you’ve probably seen koeksisters being sold on street corners many time by now. This sticky and sweet treat has various versions in different cultures, but the South African kind is particularly syrupy, a twisted or braided doughnut. Although if you’re in Western Cape, their koeksisters have a spicy taste to it with a sprinkle of coconut.

Forget burgers and fries! South Africa’s fast food trend has always been these “bunnies” as they would call it. Bunny chows are basically a hollowed loafs of bread filled with curry. If you love a good hearty meal, you’ll die for this.

This is the South African version of a salami. Droewors are made from boereworse sausages, quite thin then dried. They make awesome snacks for your long road trips.

Love a good beef jerky? We might’ve just found something a little stranger but tastes even better! Try South Africa’s biltong. Their meats can range from beef to ostrich, so be careful of what you’re consuming if you’re not used to eating bizarre foods!

Ewww right? Think again! Mashonzha, which are mopane worms, is one of the top things you’ve got to try in South Africa. These non-toxic caterpillar-like worms are typically grilled or fried then served with peanuts or chili sauce. C’mon, you only live once!

Italians have their meatballs, South Africans have their frikkadels! These savory little guys are made with onions, bread, eggs, vinegar, nutmeg and coriander and can be either baked or deep-fried.

If you’re a lover of grits, then you pap might just be the perfect dish for you. In South Africa, pap is a traditional porridge or polenta, typically comes with meat or vegetable soup. Pap can be runny or crumbly. Dive in!

7 Amazing Places To Visit On A Uganda Safari